It’s been a good month, despite the excess snow and ice accumulating. The snow pile on the side of the driveway tells a tale of a longer winter ahead. I was able to enjoy a nice walk with my Mom and sister Melissa, during one of the lulls of the snow pounding. When contrasted with a colour other than white, it really is beautiful, and I'm glad I can use my mom's camera to take pictures while my other one remains suspended in limbo. A couple days will be white, and a couple days will be spring weather. I’ll take what I can get, and it’s beautiful while it lasts. 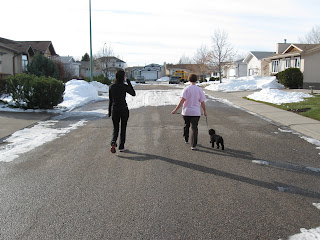 Melissa had a medical in Moose Jaw one day, so it was my first Saskatchewan road trip since I’ve been back. It was a nice little day out at the airbase where we saw the Snow Birds practicing.

Later on we did some shopping in town but didn’t stay too long once Melissa was happy with her new clothes. She half jokes that she needs to be at work to save money where she doesn’t even buy lunch. 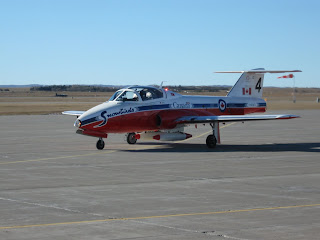 For the most part I’m happy to just spend time with others. Usually if I call Melissa up to do anything it will have to be watching TV or a movie, so I’m enthusiastic should alternative excursions arise. One night she was over, and I just decided to make some Peanut Butter cookies. It only took an hour and was quite tasty. It’s easy, so why not eh? You can have chats on the side while you do it, whereas the TV is a sedative generally. 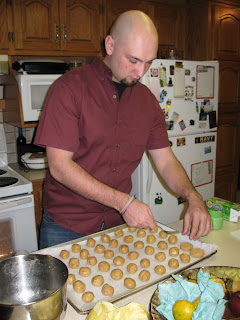 I call Ann quite a bit, and I can sense things are getting tough on her. I’m on vacation while she’s working hard, and really just waiting to see what I’m going to do before we can be together again. It’s been about 6 months since we’ve seen each other. She's doing well though, though she told me recently she works 7 days a week with 2 jobs at the moment; it can be a tough life in Thailand.

Come Nov 11th, Remembrance Day, we went to Regina’s central park. Melissa was in her Navy uniform, and I was early enough to get a good spot to stand and watch the proceedings.

I was a bit surprised how many Christian references and prayers were made, given how the people who fought and died were most likely of many different backgrounds, but that’s the way it goes around here I guess. I was happy there were many people out there braving to cold to give thanks to those who have fallen. 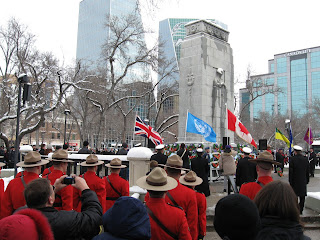 I saw a Universityof Regina hockey game with my friend Ken at the renovated Agribition area. There were many hockey rinks, and many more Canadians drinking beer and watching the proceedings. It was a cultural event and fairly entertaining even if our team lost.

It was a good time to visit the Schoenroth side of the family this month. For the first time since I’ve been back, there was a birthday gathering as I had been looking forward to; a chance to catch up with some of my huge family. What struck me right away were all the children suddenly running around where there really hasn’t been since I was little. More disturbing than that, I didn’t really know any of them. 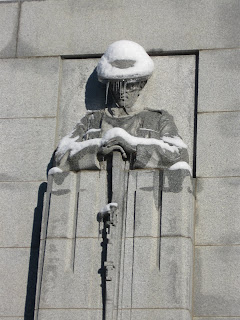 It was one of those weird moments of realization that my childhood generation has come and gone, had their chance to run around under tables and lick the icing off candles. It was great, but now I can’t help but feel I was one of those “boring” adults that just talked about stuff instead of running around and playing games. Luckily not all is lost though; my friend Baden and I were visiting in the basement in-between games of make-belief gunfights with kids that were shooting up the place. It was as fun as ever, even if we never really got off the couch. My brother John came down to join us later, but he was too ‘mature’ to play along. That’s ok, more fun for us. I think I’m a lot better with kids now, after having taught them for years.

Before all that, I made an effort to go from room to room, person to person, and try to touch base again. Everyone is as lively as I remember, and catching up was as easy as it was enjoyable. I’ve been warned by people coming back not to get upset when you get asked “how was Japan?” over and over, as there is no way to sum up 3 years of your life in a 3 worded question. 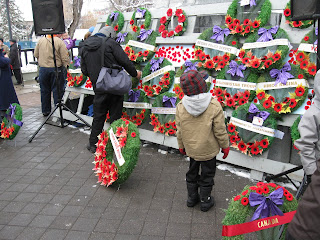 No, if someone was interested in knowing something, they asked a great question, which I’d try to follow up with a great story. I feel like I’m full of those now, as I feel I’ve lived a lifetime of adventure in those short years. It’s not like I want to talk about myself for hours either and if I try, as I’ve learnt, I’ll lose my voice after a while. I usually like to hear other people’s stories more than I like telling my own, and like Larry King said: "I never learned anything while I was talking."

The time went fast at the party of course, but luckily it was followed up with another one not long later: my dad’s 60th birthday. He made a Turkey feast and it was nice to go and see the old farmhouse again. There was more cake, more family, more laughter to be enjoyed by all. Happy Birthday Dad. 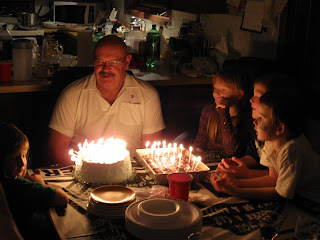 That morning the same day however my buddy Lester asked me: “Hey, want to go to Las Vegas for a week?” He found round trip airfare, including hotel accommodation on the strip for 1 week for $380 after taxes (and me putting in for extra health insurance; I’ve heard too many horror stories about the American Health System to take a chance).

I know I didn’t want to go on a potentially pricey holiday before I had a job, but what a deal eh? Some of my friends told me they would be angry with me if I said ‘no’. So for next time, look forward to some Vegas stories ^_^

"When you talk, you repeat what you already know; when you listen, you often learn something." -Jared Sparks

(I know this quote is almost identical to the Larry King one earlier, but it’s just as good)