Well, I’ve been in Canada a month now and I haven’t posted a new entry. I finally finished the last of my unpacking today, so maybe I’m ‘caught up’ enough to dip into this hobby yet again; after all, I still have friends in Japan that may take interest in my travels. I suspect the format and feel of my blog may change a lot; always try something new eh? It may even get a face lift as I figure out my next big adventure.


My first week back, 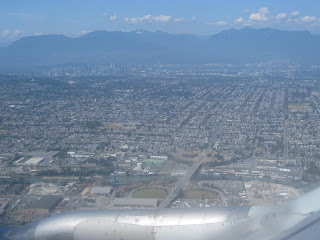 now over 3 weeks ago, was a big trip to Vancouver. I stayed with my friend Steve, who was awesome enough to meet me at the airport and help me haul my heavy luggage back to his place to stay. I was wired from the lack of sleep, being back, and seeing my good friend that I babbled incessantly. I was relating many things as I saw them, and sharing many stories of my time in Japan.

The “Reverse Culture Shock”, an overused phrase hanging heavily over my head before departure was feared, and perhaps I took a proactive attempt to breach it prematurely. Upon relating my fears, my friend had no idea what I was talking about, so I should probably explain: “Reverse Culture Shock” is usually worse than culture shock itself, as I should be more familiar and comfortable with my native culture. Since I’ve been absent so long: my country has changed, my friends have changed, and I have changed. Some people have a hard time coping with that, as I remember one former JET was quoted as saying: “I felt like I had no home to return to anymore”

Oh ya, and transferring in the States was terrible. Despite my need to only transfer, I still had to go through customs, find my luggage, check it again, run around, 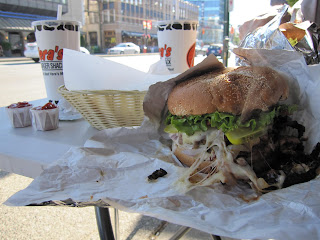 get stopped and asked awkward questions among other things. I had over 2 hours to make my transfer, but because of the system I almost missed that flight, and had to sprint a great distance to catch it. I was not amused. By comparison when I got to Vancouver, after landing I saw Steve within 15 minutes maybe. If I can help it, I’ll book flights that never transfer in the states again. They treated my possible missed departure like everyday business, while I panicked wondering what I’d have to do if I’d missed my flight like they were trying to make me.

Anyways, Vancouver is awesome. That first night Steve took me out for some amazing hamburgers and we geeked out watching TV shows and drinking Canadian beers after. Of course, I had a beer or two every day in Vancouver, and marveled at the diverse selection found there. Steve had to work the next day, I guess Friday the 30th (I gained a day by crossing the Pacific) so I walked from his place to downtown; a beautiful trip over some huge bridges adorning 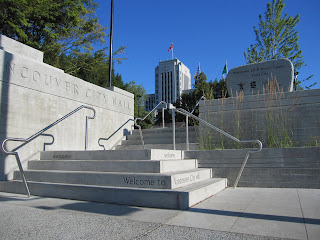 the skyline. The only thing odd I found was many of the skyscrapers were identical to each other; apparently many employed the same architect.

Now downtown, I stopped for pizza at a little shop. I was delighted to have some Canadian pizza again, full of flavour, and a small side of wings. My first acquaintance I sat with was a pleasant girl, and we had a good talk. After she left, and homeless man came in and took her can from the table. Stranger ye, after that there was another man with perhaps some mental problems; for he would eat really fast, then convulse while speaking in tongues. After the first minute, I wondered if he was choking, but soon enough he would stuff his face some more, before his next session of crazy garble.

There were many homeless, and the smell of drugs was everywhere. 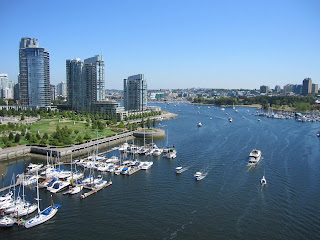 I was informed you can leave a can/bottle anywhere in the city and it would be cleaned up within 10 minutes. They never caused me any problems, and in a way were keeping the city clean, but it was still a shock to experience again. Unlike Sydney though, the subway was very clean, and much more frequent; I highly enjoyed the public transit.

It was a long weekend because of a “BC day” that was new. What also was new was the “Harmony Tax”, which does little more than add the Provincial and Government taxes together, and make the price of food more expensive. It’s still hard getting used to adding 12% more money to everything I purchase, and harder yet feeling obligated to add another 10% or so for tips at restaurants. I already miss the service of Japan, or atleast being able to get my own water; many a times already I’ve tried flagging a waitress in vain, or spent half a meal thirsty. Yet, they must be tipped apparently.

Maybe there is more to write about than I thought; I know the depression and other stuff didn’t hit until the 2nd or 3rd 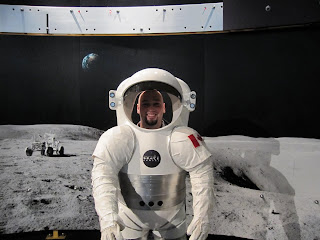 week back, but I should try and keep these stories to Vancouver, as it was all fun ^_^ Steve took me out to the famous (and therefore tourist heavy) “Granville Island”, where we saw his old Pastry Chef school, had the best Fish -n- Chips in Vancouver, and bought fresh produce like blueberries for cheap at the farmer’s market. That night, he made some “Texas Style” chili, which is different from the normal chili I’m used to with beans and such, but it was delicious.

Sunday was a gloomy day, and we spent it indoors at the HR MacMillan Space Centre. I didn’t expect to be there all day, but we were bouncing from the planetarium 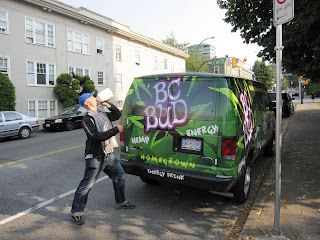 to the main museum constantly because they had new and interesting shows playing every hour. It was tough, given my jet lag, being in a dark room and reclining on a soft chair to look at the stars above; I started snoring during one show. I’m so glad we went though, but am a bit sad we missed the pride week festivities across the lake; I doubt you’ll see a party like that in Regina or anything.

I think it was Monday now, and we caught up with my friend Erika again; a teacher from Okaya during my first year in Japan, and I met up with her when I visited last year in Victoria. We went for some delicious sushi, then later she took us to “wreck beach”, a clothing optional establishment. 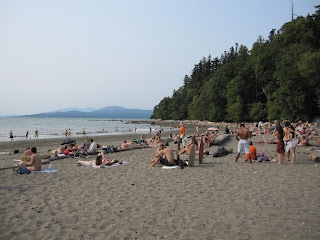 It was right beside the university, and it was quite the attraction. Most people had clothes on of course, but it was still full of crazy sites like a naked man standing and paddling on a surfboard, or a guy wearing only a cape.

The police came by once, and despite the place smelling like drugs, they were only concerned with open alcohol. People warned others of the upcoming inspection, so we were safe, but the group beside us wasn’t so lucky for some reason. All that happened was their beer got poured out and I think they got a warning. When they were gone, we continued drinking. That night Erika made us some awesome tacos.

Steve was back to work on Tuesday so I went exploring. Everyone 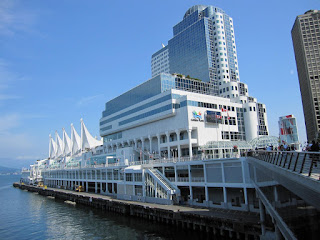 talked about this big, awesome aquarium, so after getting lost downtown exploring for a while, I gave it a look. I was very disappointed and would recommend anyone go to any one of the many aquariums I had seen in Japan for a much better time. Stanley Park was really cool though, even if I only saw a little bit. Right away, there were a couple raccoons on the tree and I hadn’t seen them before. In my excitement, I was ready to point them out to others passing by before realizing they treated them like pests. Sure enough later on they scared some girls off a bench so they could rummage a nearby garbage can. Oh well, for the brief time I saw them they were kind of cute. 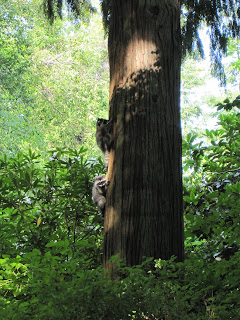 was my last day in Vancouver, though I don’t have many pictures and doubt I did much. It seemed I was sleeping in until noon each day, but I had a lot of fun. Steve is a great cook and made lots of food, while we drank beers and watched geeky shows. “Burn Notice”, “Community” and more joined a list of TV shows I should probably watch, but just don’t have the time to.

I booked a bus to Victoria, bid farewell to my good friend, and stayed with my sister for the next 4 days or so.

"Improve relationships with others by assuming that they can hear everything you say about them." -Stephen R. Covey