It’s strange writing that considering there is still traces of snow and ice lying around, but I’ll probably stop canceling out on so many events soon enough and start keeping myself too busy again. For example Ann is trying to get a visa to come visit me, which requires formal paperwork from me apparently, as she will be my guest. Oh and I didn't take any new pictures, so I'm posting random ones from this year so far.

One formal letter of which included a very detailed itinerary, 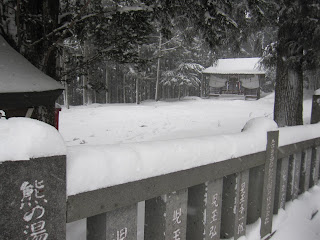 at a level not even I plan out on my trips. It was a very interesting exercise though, planning future events and such down on a calendar that was easy to see. I’ve always liked the big picture. I understand why people plan ahead now, where as I usually go unprepared and flexible; there really is a colorful selection of upcoming events from sumo to cherry blossoms to festivals. I truly love spring.

I’m glad I don’t have to make one up for my mom as well for her to get a visa, but I may do it anyways so that we readily know our options for upcoming events when she comes for a short 2 weeks. For example, a huge and crazy once-every-6-years festival fast approaches. I’ll talk about it more in April/May when I go with my guests.

The week was relaxed, I think I taught 3 classes in total, and this week I only have 1. It may be hard to post next week because of a conference, but maybe I can write it up on the bus and post it from my hostel or wherever I stay. Today I marked tests, and it was cute how most of the students said they want to go to Canada, when in class only a few said the same thing. Maybe it’s the Olympic effect.

On Thursday Mervin sent me an invite to his “winter sucks” party. With a title like that, I could hardly refuse. He has a nice house, and many people came out for food, drinks and so on. One guy came with 3 buckets of KFC chicken for everyone; there’s something to be said about the generosity of Japanese people. I wish I hadn’t bought supper already, but ended up eating way too much anyways.

One of the talks was with my good bud Dougal again, I hadn’t seen him in months it felt like. He wanted to argue that winter did not in fact suck, but I told him he wouldn’t say that if he was in that accident 2 weeks ago in that blizzard, so that made him stop and think about it despite his passionate argument moments earlier. :) He’s a good guy; it’s fun to joke around again.

I didn’t know what to expect at the party, but Mervin told me he just got a new, and large, TV. After hearing that, I brought some video games just in case. Most people were busy socializing though, so the gaming was limited, and we watched some Blu Ray movies later when it was down to Me, Richard and Erin that were staying the night. “Planet Earth” is an amazingly beautiful series if you haven’t seen it, but it’s so relaxing and surreal we couldn’t watch much than an episode before we were falling asleep, and talks were limited to “wow…”

Mervin and Richard went to Shiojiri the next day for a Valentine’s event, but I went home instead intending to apply for jobs. Unfortunately 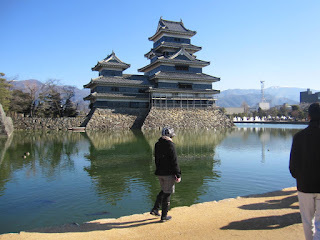 I was derailed with some pressing things in my e-mail inbox instead. It was a late start on the day, and Michelle told me at Mervin’s the previous night that we should play games, and she came over just for that.

I got a new Mario game for the Wii, and it’s the first time you can play co-op. To maximize the fun, we’d need 4 people. I made some calls, and by 7 I had a full house with Ike, Molly, Stu and Michelle. We had to pass a controller around every now and then, but it worked out fine, as we avoided the cold hallway where people sympathized with my brutal sleeping conditions.

I haven’t laughed so hard and had so much fun in a long time. If you take the game seriously, then you will get angry and not have as much fun, as you die a lot. Most times because of the other players and not the game, as you bounce off each other. So it’s very common to try and make a difficult jump, just to have someone else try and make the same one, leaving you to bounce off their head and knock them into a pit.

Another example was when Ike got a power-up and started bragging, so I picked him up and threw him into a hole :) I guess it may sounds strange if I try and talk about it, so I really recommend you try it for yourself: pure unbridled fun and mayhem. Challenging too. We ordered in 2 pizzas and the hours flew away. Oh how I missed gaming parties with friends.

Sunday was relaxing, I played the game single player, and later got into talks with family and friends back home until 2 in the morning. I should have been applying for jobs again, but atleast my resume is updated now. I wrote down “available in September”

I was talking with Erika and she gave me lots of tips for the transition back out of Japan, and Neal gave me a nice kick 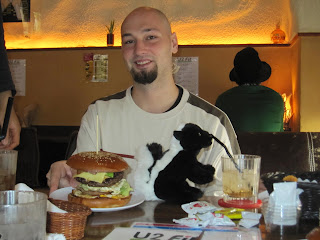 in the butt to start looking around for jobs. I only really applied at one place so far, the Canadian Space Agency. I was quite scared to try before, but now I’m a lot more confident in chasing my childhood dreams, wherever they may lead me.

I plan on applying at the European one as well, as you can apply to actual postings as opposed to passively posting your resume into a pool of others for their reference if something opens up. Fingers crossed though right? I can’t think of anything that would be more fun, challenging, rewarding and exciting for me than to work on space robotics, and I will try my best to get in somewhere.

I was talking with Neal today, and since I plan on traveling for a while before I start working again, he wants to come along since we don’t have any summer plans yet. Instantly we were excited at the prospects of hopping around Canada together seeing places that I’ve always wanted to, like the Yukon or Montreal.

It may be expensive, so I should plan more ahead. If only Canada had more of an airline system like Australia or Europe, where you can travel for 2 hours by plane for $50 or less. I guess we should throw together and itinerary; my flight to Calgary (and not Regina) is provided by JET, so that helps me out.

I’m so happy to see the end of winter approaching, and the return of life.