After the accident, I told myself that I wasn’t going to leave my house until the ice and winter were gone. Sure enough, it rained half the week, effectively washing winter away. Yesterday was a particularly nice day, so I did my laundry at night, intending to hang it outside in the morning to dry, but I woke up to my breath in a cloud and a world covered in white again; it has been snowing all day so far.

Perhaps I may be misdirecting all my frustration and unhappiness at winter in general, but I digress. 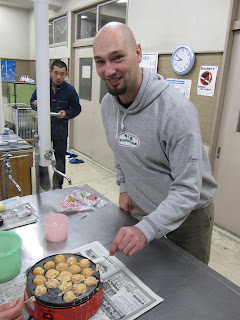 had a tea party Tuesdays, but I’m not much for tea and only went a couple times I believe. They changed it up now, and last week they cooked okonomiyaki (Japanese pancakes) and takoyaki (delicious octopus balls). I had never made takoyaki before, but considering how much I love them, I’m glad I finally had the chance.

The result: messy, but super easy, like pretty much anything you can cook. There is no way I won’t take one of these $10 cookers back to Canada with me, unless I can buy them there too and save on the luggage space; now I can share a taste of Japan with my friends and family back home. I just need a recipe, which is always easy to find online, and an audience, then I’ll cook some up. It was really fun, the only problem being not burning your mouth by eating them too soon.

I should really make the okonomiyaki too, as they’re almost easier to make. Well, you know how easy pancakes are; you toss a batter together and throw it on a skillet. We ate, drank, talked and were merry.

Richard and I wanted to start going to the gym this week, but after the accident my neck was tender for a day. It was just the one-day, so maybe it’s nothing serious, but we took the week off. Thursday was a National holiday, and Honami invited me to join a Daruma festival in Takato.

“Daruma” was an ancient monk or something, that meditated so much and for so long he reached “perfect enlightenment” or whatever you’re trying to do when you just sit there for hours. As a result, he lots his arms and legs and you can’t tip him over, giving him an egg shape.

Honami tried explaining it to me, but the language barrier was an issue. I guess you write you wish in the doll’s left eye, then when it comes true, you either say thank you or write the wish again in the right eye. Every year you bring your old Daruma back to the temple to be burned like those charms they sell, effectively making sure they have a market of people to buy again the next year. Er, I mean, something about cleansing spirits out of the old something or other.

The temple was pretty, the people were friendly, and it rained on us the whole time. 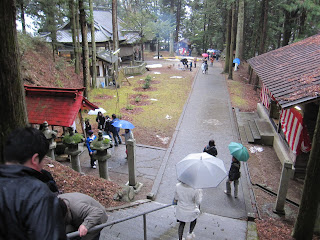 I was in bed that morning debating if I wanted to go out or not. Michelle offered to come and play video games together for the day, but I had told Honami already that we should see the festival since she was kind enough to invite me. I know I promised myself not to leave my house until winter was over, and considering the rain; I thought I had no excuse.

Don’t get me wrong though, I’m glad I went. Her husband and her are really, really nice, and we went to a fancy Onsen after. There was something in the water that made you feel all silky too. Later in the waiting room lounge, I watched some TV, which is really rare for me, and I almost would have thought the Olympics started already with all the clips they were showing. Interestingly enough, it was mostly bloopers of painful accidents.

If you couldn’t tell, it feels like I’m arguing with myself constantly about if I should leave the house or not. One day the fumes from the kerosene heater were bad enough, that I left the window open for an hour for the oxygen, and to my shock almost immediately, there was a mosquito in my house. The ice wasn’t completely gone yet; maybe they’re some mutant hybrid mosquitoes. That used to be one of winter’s only redeeming features; killing the hordes of bugs.

My dilemma came up again on the weekend, starting with Friday night when Hiroko was having a wine party. Rich wasn’t going, so I decided 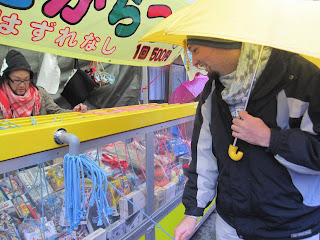 not to as well, which turned out ok as the dudes running it wanted $30 to enter. I remember meeting half of them at that last party, so I didn’t feel bad, but I did later when Hiroko called saying her and Pei Fun missed me. I figured I could spend that much on pizza, which I did, and was already eating when she called. I played games by the heater until 7:30 in the morning. Being a bachelor has its perks. 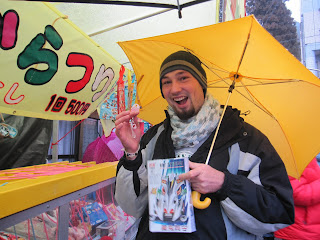 though, so I went to the Mardi Gras party down south with Rich and T. I enjoyed the road trip a bit too much though, and got into the music, conversation and booze I had brought along. The food was amazing, we had some fun, but in a shocking move of stupidity by me, I got sick. I don’t remember the last time I was silly enough to do that, but it ended up being an early night for me.

I don’t want to catalog what I drank, but it was too much. Funny memories I have include getting sick once, rejoining the party as if forgetting what had just happened, only to get sick again later, and drunk-calling Ann in Thailand. She was confused, and it was kept short when I remembered that my call was probably going to be expensive. I also bought a milk carton of Japanese Sake because Ike said it was good. Maybe that’s when things really went downhill.

Anyways Sunday came and after cleaning up, I had my excuse to not go out to yet another event, a talent show in Okaya, because I was hung over. Unfortunately I was sick enough that I didn’t even want to play games, but drank lots of water and slept instead. I guess it was Valentines, as there were chocolates in my mailbox from Noriko. In her letter she mentioned to enjoy the last of my time here.

She is booking holidays to visit me in April for the cherry blossoms. I got an email from my mom too; she will come a little later and stay 2 weeks. I got an email from a cousin, saying he’ll stop by sometime in May. Ann in Thailand is working on getting a visa to visit me as well. I guess maybe my ‘last call’ has been answered, and I look forward to meeting, and hosting if need be, every one of them.

Time. It whirls forward out of control. I’m trying to get a footing, but feel like I’m trapped in a current, drowning and gasping for breath. Maybe it’s the winter. Maybe it’s the accident. Maybe it's the fumes from my heater. Maybe it’s my weight. Maybe it’s the lack of work/distraction many people use as an outlet to forget that time plummets forward; I only had 2 classes last week, and maybe 3 this week.

I don’t think I’m depressed, because I thought I knew what that felt like; hopefully this feeling is just remnants of that hangover. Sleep it off Tony.

"The most wasted of all days is one without laughter" -Edward E. Cummings