All the Small Things

Wow, two weeks to write up about now. We celebrated “golden week” here in Japan last week and with it a long holiday, so I didn’t update. Last year I went on a crazy road trip, sardined into a van with 9 people to Kyushu. This year we didn’t get a van and many people did their own things. Richard went to Tokyo, Patricia to Okinawa, Neal to Bali and so on.

But the week leading up to the holidays was pretty good I suppose. On Tuesday I had a work party for Yayoi to welcome the new teacher, Takematsu 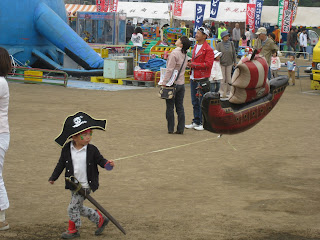 sensei; as tradition dictates every year a teacher leaves and a new one is transferred in. I’m not a fan of the system, but I’m sure it’s there for a reason. I hear Japan’s school system is still modeled after Germany’s; pre-war era. So ya, the party was pretty good at the same “blue dragon” restaurant where my mom and last year’s entrant, Momose sensei had their welcome parties; and where my mom told all my co-workers I drink too much :) or something. I don’t remember with the red cheeks and all.

Wednesday was a day off to sleep off the booze, but Neal and I were invited to Ono Sensei’s house for food with her husband. That was my third time going there, and Neal came this time because she transferred to his school and… maybe they gossip about me all day, I don’t know :) Either way we had some amazing okomiyaki (Japanese pancakes) and an embarrassing amount of beer over 6 hours or so of great conversation. I wasn’t embarrassed per-say; I could have drunk a lot more! But when Neal saw the pile of cans and started taking pictures, the party eased up.

Thursday night was suppose to be Tatsuno’s welcome party too, but it was cancelled again. This time it was due to… rather unfortunate circumstances. On Tuesday at work, during some downtime, I stood outside for an hour, maybe more. I just enjoyed the feeling of the warm sun on my back, the birds singing in the air, the fresh mountain air I was breathing in, and thinking about how good life is. When school ended though, Uchiyama sensei called me into her office to tell me my neighbor of the last 2 years in Tatsuno, Mr. Hirasawa Sensei, died that day of cancer.

I won’t soil his memory by writing unnecessary things, but instead share some of my happier memories about him. He was always smiling and polite, and helped me many times. One of the times, when I first arrived and didn’t know where to put my garbage, a month had passed and things started to liquefy in the bag, but he helped me out. There was another time when he helped me out around town when I was having problems with the language barrier. My best memory maybe was during one of our parties and he sang Opera for us. He lived in Italy for more than a decade and had such an amazing voice. He will be missed.

Thursday classes were difficult, having everyone feeling down. Some of my students cried for most of my morning class; they were in his choir club. We gathered in the gym and words were said by the principle; most of which I didn’t understand. It was somber, but interesting to see how things are different in Japan. Keeping face is important I’ve learnt, as even in the face of a tragedy, they still look firm and unshaken. Maybe showing emotions is not a favourable thing. The funeral was on Friday, but I was at school in Yayoi and couldn’t attend.

On a lighter note Friday and Saturday, the start of the golden week, were really awesome. My plan was to cut out Internet, unplug my phone and any other way to communicate with the outside world and be a hermit in my awesome new house; enjoying my solitude. The first two nights however was more of a big geek-streak, where I played some games online with my friends in Canada until 6 in the morning. It was fun :)

On Sunday I slept in until 2 in the afternoon, which I haven’t 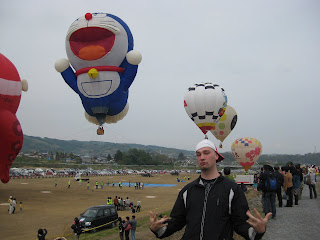 been able to do in years, but I guess I punished my body enough for it to happen. I ended up talking with my friend Megumi in Tokyo for a couple hours online who wanted me to visit, but I instead drove up to Saku for a hot air balloon festival that I caught wind about a little while back, and got a message from Erika while I was sleeping to see if I was still coming. Might as well leave the house right?

I’m glad I did, it was a great drive up and I got together with some great people. I didn’t arrive until late, but in time for drinking, tasty food and my first game of “Never have I ever”. You say something you haven’t done, and people who have done it take a drink. As it was explained to me, later on in the game it turns sexual, but I won the rock-paper-scissors diplomacy act and started the game off with a sexual question haha. Later on we turned it into an “I have done” game and if you haven’t then you take a drink. It was fun getting them to drink with silly things, like “Never have I ever been American” and stuff like that. It was an interesting way to get to know each other better :)

In the morning, 4 of us got into a car and went out for the hot air balloon festival. It was cool and all, what with the festival food and pretty balloons, but we weren’t there for long. We ended up driving to the nearby volcano, the one my ill-fated previous car died while trying to get to it. This is one thing you hear about during golden week: don’t travel around Japan during that time.

Everyone has that holiday and everyone is trying to go somewhere. I heard the interstate was bumper to bumper, and on the way to the volcano there was a huge line of cars going shopping at the next town over. Never in my life have I seen so many different and so many expensive cars on the road. Lamborghinis and Benzes and other makes of vehicles you don’t recognize as anything other than a sign that someone has more money than common sense, especially with Japan’s consumerist approach to vehicles.

This volcano is famous for still being active and exploding every 200 years or so; of which it’s due for another eruption. Last month it had a mini-eruption 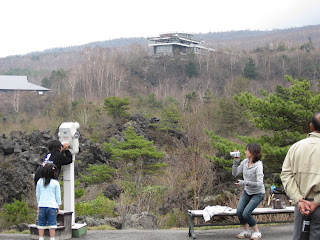 and rocks were supposedly still flying out. It was a bit of a cloudy day though, but that didn’t stop us from walking around paths in the old lava formations that have since cooled and started to crack, break and buckle under its own hastily formed weight. It was so beautiful and we spent hours walking around talking and even singing Disney classics as that were on Erika’s ipod on the way up. Us foreigners always do our part to freak out the local Japanese people perhaps.

Further up the hill was a very obviously abandoned building of some sort. It looked so creepy with some boarded up windows, signs letters than have fallen into disrepair and scattered on the ground around it, and concrete ledges that have fallen apart; baring it’s rebar skeleton. It gave an incredible atmosphere and ominous warning that death, and possibly zombies were nearby. I wanted to grab a shotgun and some friends and jump inside to hunt the zombies. Perhaps I need a break from the games.

That night Erika made another amazing Southern meal for us and we watched some “No Reservations” (an awesome travel/food show that I want to see more of) and went to sleep early after the busy day. In the morning we were treated to a Southern breakfast not unlike what Craig treated Neal and I to last fall. Home made gravy and biscuits with scrambled eggs and grits. It was amazing.

Over all, those couple days were an amazing adventure and learning experience about what everyone knows as “The South.” It’s a damn shame they have been given such a bad rep. Their accent is charming, their hospitality is exquisite and their food is delicious! I learnt so much that it has joined my list of “place to go.” I learnt all sorts of things to explain the bad stereotypes, (like with the fundies) cultural differences (like why gas BBQ or ‘being skinny’ is shunned) and other neat things that I want to see (like lightning storms in the sky that last all night when the weather is too hot and miserable). It was incredibly interesting stuff; I love the south now even though I’ve never been… (ToT)

I got back home that Tuesday and forgot to turn off my lights given it was daytime still. (I turned them on in one of the many tunnels I drove through; one was over 2km). I was therefore grounded without a car until Saturday when Patricia 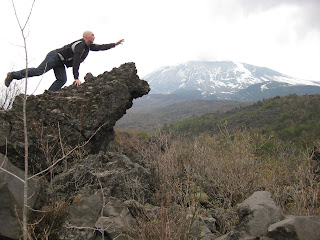 came over and gave me a boost. Ah nostalgia, the booster cables. Everyone else was gone until then, what with being on holidays still. I still enjoyed the last couple days even though I had to work on Thursday and Friday. On Friday I was sick, so school was hard and that night was spent on the couch plowing through 3 movies. The cold mostly went away, but I’m still feeling the effects a bit.

Saturday night was the last night for the Philippine girls in Japan as they were going home Sunday. They wanted to cook me food and hang out last Thursday, but it was pouring rain and my car was dead so I opted out of the ½ hour walk to get it. We got together and had something of a good visit I guess, even though I was fighting exhaustion and a bit of my cold still. I should have gone home earlier maybe, I hate being the focus of attention for something bad like that; they went so far as to suggest I should go to the hospital. The doctor prescribes: best rest. Sorry ladies, I’m not spending money to find that out. (Healthcare isn’t 100% covered in Japan)

Sunday was a lazy, hot day. The windows were open but I was still sweating, and it was great. At least it wasn’t too hot; I’ll have to get my fan out. Richard got a hold of me and we went for food, and then later watched a movie. Not a bad holiday I think :)