Richard got up early to take a tour I’ve taken previously, so I spent the majority of the day hanging 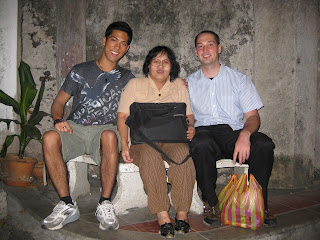 out with Lily. We checked into a real hotel this time, which was cheaper and nicer than the one I first stayed at, and it had a pool. I’ve never understood before why someone would travel thousands of kilometers to hang out in front of an artificial pool all day, but I finally understood this trip, as it’s a relaxing reprieve from the frantic sight seeing. A couple times during the stay I sat by it just reading a book or two. (Picture: Richard, Lily, me)

Anyways, Lily and I had some Thai curry for lunch then went to a large shopping mall where I was hoping to see the aquarium. Because it was so close to new years though, the place was absolutely packed with school kids, so that idea was scrapped. I ended up just walking around the mall with Lily, talking and learning new things, like what celebrities were on various posters or what food we were looking at.

That night, Richard, Lily, her niece and I went to see the famous cabaret. Lily is so cool, if not a bit strange. She loves cats, and there are millions of strays in Bangkok. She keeps food on her and when we see strays she throws out some fish bits for them. Anyways the cabaret sports “lady boys” in full force. We were treated for over an hour to a song-and-dance show of various cover songs.

Now if you don’t know the “lady boys”, they are quite famous in Thailand. They are men who dress in drag, and the hardcore ones had extensive surgery to look like women. The easiest such surgery is breast implants, but some do more like remove their adam’s apple or other stuff. Some of the people on stage were really pretty, sure, but you knew they were men; and like Richard said: “I’m not sure how I’m suppose to take this”. Haha I tried to enjoy the cabaret for what it was, but it was always in your mind that you shouldn’t be checking out the cute ‘girls’ in tight clothes and tighter bodies walking around on stage.

The show was really good, and after it, the pretty ‘ladies’ thanked you as you walked out. You could get pictures with them so we did; you can see one of the prettier ones in the white dress, too bad that one in red snuck in… he was maybe the worst. When we went to pose, they grabbed you and threw you in for the picture. The strength in which 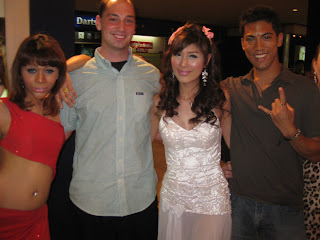 they grabbed and threw you was surprising at first, but they’re dudes! Easy to forget that with many of them… After the picture one asked for a tip. Sure, the show was fun and thinking the tip was for everyone, I gave a small tip. He stuffed it in his bra and walked away like a prissy queen, and 5 others aggressively swarmed looking for a tip too. It was scary really, reminded me of those horrible bums in China; ask my buddy Chris for more stories about them. We got out of there as soon as we could right after, too bad they had to ruin the mood like that.

After we walked around to see more nightlife. Our first stop was coincidentally another ping-pong show with different acts, but we didn’t stay long as the girls were nasty and it was weird with Lily and her cute Niece joining us. The next stop was a small step up, a “go-go” bar. Here it was more ‘family friendly’ in that the girls weren’t doing nasty things and had ‘some’ clothes on, but in essence it was little more than a sleazy place to find ‘workers’. The girls had numbers on their chests and worked in two big groups. While one group was on stage dancing, the other would go around finding ‘customers’.

These girls weren’t interesting or fun like my first night at the ping-pong show. Here if you weren’t going to buy their ‘services’ right away they left and wouldn’t talk. The dances were little more than a bit of hip shaking to uninspired music. We grew tired of it quickly, and feeling bored, we called it an early night. Lily gave us lots of warnings about these girls too; how some tourists get drugged or robbed or whatever, and if we wanted a ‘worker’ she knew some nice places to take us to find one where they performed more respectable business practices. Haha you’re so sweet Lily, but we’ll be ok without one.

I guess we did a bit more walking around, seeing a bit of a night market and other things like elephants on the sidewalk (a small one). In the hotel I logged on to the Internet any our friend Noboru was online. He needed a place to stay for the night and wanted to sleep on the floor :) well you can’t say I’m not there for a friend, haha We gave him blankets and stuff and that night’s stay was a little cheaper.

It was New Year’s Eve now and there were 3 of us. We got a bigger room with 3 beds and did our separate things for the day. Noboru walked to the grand palace, Richard went on another tour and I took a class on Thai massage. Lily was awesome, again, and sent me to her friend’s for a private lesson. It was bit strange with her working a food stand out front for a little while during lunch, and taking a small nap during part of my hands-on massaging. Maybe I’m just that good already? Anyways, I got lots of information; hand on experience and the foundation for being a good masseuse ;) Something that came up, not only in the massage class, but again and again, was the “you’re a fast learner.” …I like that.

That night we went to a monstrous countdown for the New Year downtown. We got there a couple hours early and the roads were closed a couple kilometers in advance. Poor Noboru ate something funny, and was feeling under the weather. He tried to muscle it out, but literally on the 11th hour he threw in the towel and spent the rest of the trip near the toilet and for a week or two after. Poor guy, good thing we were there to help him out and stuff though. There were so many live bands you couldn’t make any of them out as it was just a pile of noise.

Richard and I stuck it out until the end for the somewhat confusing countdown. The main clock was digital on a spherical ball, but the 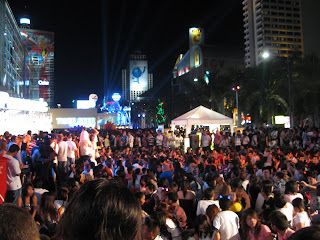 specific spot we were at had the minute counter hidden, because it was a sphere. Our section ended up counting down 4 times or more, not to mention another clock on a big building in the background was a minute or two fast. Finally when it was zero, it was projected onto a big screen in its background. That video feed had a couple second delay. Geez.

Anyways, happy new year, crackers went off, silly string was shot, fireworks lit up the sky close to the crowd and we all tried to get out of there. I fell once but there was no room to fall so I hurt someone and got a face full of someone’s butt. It’s an experience sure, and I’m glad I did it, but I understand why people watch the countdown on TVs at home now. It’s a long wait with too many people for something very short and unsatisfying during one of the coldest time of the year. Oh and my new years was like 12 hours before Canada’s :P 2 hours behind Japan’s though.

I think we saw a movie the next day in those amazing, amazing theaters Thailand has and didn’t do too much more. I guess we got some presents too in a large market; it was good to haggle together and get better prices on some simple gifts. A hard goodbye to Lily and a crazy taxi ride to the airport at 4 in the morning later (the idiot backed up on the freeway! You could hear tires screeching behind us), we were on our way out of Thailand. Oh and one of the screens at the airport had a windows error message on it.

Now I said before I wouldn’t talk too much about girls, not to be confused with the posted picture of men looking like girls. No, I’m not a player, and I didn’t like the structure of my Vietnam’s posts making me sound like one, so I’ve omitted stories up until now. 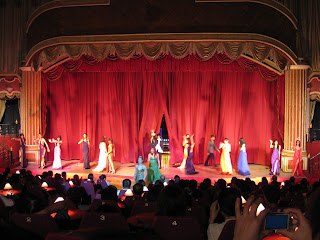 I met many wonderful girls on this trip; I broke some hearts, some broke mine, and some just didn’t kick off at all usually because of short time. There was a Burma girl on a tour with me, Lily’s English teaching friend, a blond Russian in a thong bikini on the beach named Helen, a Thai tour guide knick-named ‘w’, a cute Chinese girl sitting beside me on the bus, and various other Thai girls, but one girl and I shared something special.

Her name was Anna. She dripped with personality and was gorgeous. We had each other laughing and enjoying ourselves the whole time, talking about whatever we could with the language barrier, it didn't matter. She did cool, quirky things, that reminded me of things I used to do in the past, but have since become distant memories; where did that piece of old Tony go that I loved so much? We only got together twice, and no more as she was busy with work and I was busy with seeing the country. She didn’t want to move to Japan and I didn’t want to move to Bangkok so that’s where it ends. In tears, she put a ring she was wearing on my pinky and told me to always wear it to remember her. I had nothing like that to give her really, but did have a Canadian pin for her. That night, my pinky turned purple and was in pain. I had to use soap to take it off.

Sorry Anna, and Thank you for the memories.

"A smile is the shortest distance between two people." -Victor Borge