9 hours, a ferry ride and $30 later, we arrived in Koh Chang. The ferry was pretty cool; maybe this was my first time riding one that big. I wonder if my sister Patty rode similar ones to get to Vancouver. We got to our amazing bungalow, where 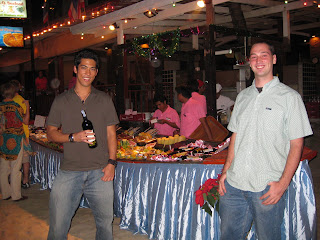 we were spending about $50 each per night. Because this was the absolute peak season, the prices were more than double off-season prices. Either way it was really swanky, really close to the beach and equipped with more things than you’d ever need in a hotel like satellite TV and a table on the porch.

We didn’t do much except buy fresh fruit and supper from some carts set up and had a relaxing night. For Christmas, we spent the day on something of a tour but not really. You got on a larger boat and it took you to points of interest, like surrounding islands and coral reefs. Everyone loves a boat ride, but unfortunately the weather was a bit yucky, so in certain areas we couldn’t see the bottom of the ocean many meters below from the boat like you could on a sunny day. Once we were there, we donned snorkeling gear.

This was my first real snorkeling experience, and given the price it’s almost better than scuba. It’s not much more than floating/swimming around interesting areas, and viewing the beautiful sea life below. We went to a few coral reefs and other areas, and saw interesting things I’ve never seen before, but it’s too hard to paint a picture for you. It was really relaxing, amazing, and everyone should try it before they die.

There was a buffet on the boat for lunch, and sun tanning on the roof. Oh and we weren’t suppose to use the bathroom when we were stopped at a place; I guess unless you wanted to shock the other snorkelers haha ;) Near the end of the day on the way back, we stopped by a “monkey island” and threw left over food to maybe a hundred monkeys scrambling around making noises. They come down from the island to break oysters along the rocks using stones and eat them. Oh ya, and one of the passengers had a monkey as her pet… she was effectively creepy.

After returning, we heard we were on the quiet beach, so we went up to the “party area” where there was white sand and we hit the jackpot: turkey supper and wine to compliment the Christmas vibe of oddly decorated trees and cute hostesses 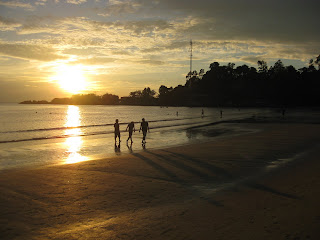 walking around with Santa hats and merry smiles. We ate on a wood table on the beach of course, and the meal was topped off with a live band not too far away, but far enough that we could talk without yelling at each other. To get there we grabbed a taxi, which is the same as a pickup truck running up and down the only road running along the coast. You sat in the back on makeshift seats, but at least it was sheltered somewhat.

It turned out that this island wasn’t much for parties, but we still enjoyed ourselves regardless by wandering around and soaking up the atmosphere. You can never tire of hearing gentle waves crash against the soft sand. There were swings, music, restaurants, decorations, sand castles, fire spinners, and other treats for the soul. We stayed up late, drank more, relaxed on the beach, played pool, met new people, and went to bed late. Despite the lack of snow, it was a Merry Christmas after all.

We still got up somewhat early as we booked a scuba diving trip. Luckily we weren’t hung over, but we were probably playing with fire still. Thailand is famous for its scuba, and the many shops set up keep the prices competitive. Regardless, a half-day cost almost $100, as this is an expensive hobby. We did two dives, and saw more wonderful things like rock cliffs, ‘flowers’ that would hide when you got close, monstrous schools of fish, huge urchins, fire coral, strange coral formations, some wreckage from damaged ships, and other breath taking sights.

The diver master helped out by leading us along, and the only thing we needed to worry about were these “trigger fish”. I guess they chase you and bite you if you enter their circular territory; it was compared to that of a hamster biting you, and we were given instructions how to escape haha. He also speculated what it would have been like to be in the ocean during that tsunami. One minute you’re floating around, the next your gauge says you’re over 30 meters deeper and your ears feel like popping from the pressure. I also got to experience thermal streams, where currents inside the currents were greatly different temperatures, but we were never too uncomfortable. Another remarkable experience.

When we returned, we were bushed. I think we ended up napping in the room for the next 4 hours. That night we went out and had fresh seafood BBQ, a whole red snapper or something, on the beach along with more wine, cheese, and other delicious Thai treats. There were live fire-spinning performances every night.

Finally we decided for a lazy day on the beach. The water was nice, the weather was sunny and the women were beautiful. From my scuba I’ve learnt to float a lot better, and I spent a lot of my time in the pool doing just that. Eventually we decided to go see something, as we were planning on going back to Bangkok the next day. We heard of a waterfall and made the trek and weren’t disappointed.

Not only was the brief nature hike there intensely wonderful for the nature lovers, but the water fall was spectacular. We swam in the fresh water pool below, and took pictures from the rocks. When we left, there was a lady selling 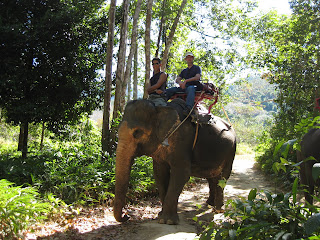 whole rotary chickens for $5 each. I would have been a damn fool to say no, so we picked one up for supper. We got back, got pictures of the sunset, had another awesome meal on the beach which included more Thai treats and wine, and had a good night’s sleep. With all the wine we drank on the trip, we should bring girls with us next time, haha

With our bus ride back to Bangkok booked in the afternoon, we spent the morning on a 2-hour elephant ride through the jungle. It was nice, not sure what else you can say about it. Relaxing maybe. About as relaxing as those hour long Thai massages you could get right on the beach; the old lady that worked on me could break a tree trunk with her grip! We enjoyed the beach as long as we could, and got back to Bangkok later that evening. We got back a little late and Lily couldn’t find us a room, so she put us in her brother’s place. It was a strange situation, but we had a place to stay for the night; Lily is really cool.

"Happiness is a conscious choice, not an automatic response." -Mildred Barthel