Where the Big Boys Come to Play

Tuesday’s Japanese class asked me to write a journal of my weekend. Why haven’t I done that before! This was the first time I put down thoughts and whatever on to paper without the help of an online translator or anything, and I filled up a whole page! I talked about how I went to Nagoya and tried shopping for shoes, but my feet were too big so now I’ll have to buy some on the internet. Then I talked about my relaxing weekend of studying and reading a book while watching Japanese people with their cool/eccentric fashion walking around.

You can see the paper is riddled with mistakes, mostly grammar orientated, but either way I’m rather proud of my first work. 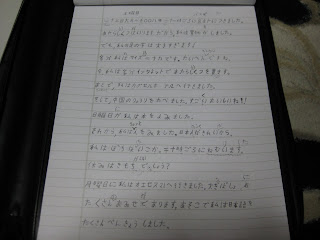 I’m so glad I bought that book on Kanji, I study out of it as often as I can and it’s exciting being able to look at those ‘crazy Chinese characters’ and have them start to make sense. They’re great building blocks to learning and understanding new vocabulary too, making memorizing 100 words a day not so crazy. For example: Tenshi, Tengoku and Tenjou (angel, heaven, roof) all start with the kanji ‘heaven.’ (天) The only problem I have now is finding time, as I can easily drain whole days doing this stuff it’s so exciting.

As time is an issue as mentioned, I am simply being too crazy perhaps. I was in Tokyo last weekend, will climb a volcano tomorrow, and Friday I leave for Okinawa to get my diving license; and in that time I have to finish an online course on diving. I wonder if your brain will puke if you stuff too much in it? Thursday and Friday were days for me to do anything because the kids were writing tests, but I spent all Thursday trying to catch up on emails (deleted well over 70) and Friday was spent getting ready for my next adventure in Tokyo; not to mention I need to start learning all that scuba stuff before I go to Okinawa Friday; I won’t be back until Oct 5 so I’m not sure how or when I’ll be updating this blog yet.

Getting off my studies, on Wednesday my students at Yayoi practiced their singing for a performance Thursday. Due to no classes, I was able to go and watch, but because I was so busy I couldn’t get out until it was over and the winning class sang an encore. It was still really nice to listen to.

Anyways, so off to Tokyo! I left Friday after school and met up with Dougal for the weekend. He’s a new JET from Canada with an IT background too, so we get along well; pretty cool guy. Although, he doesn’t have a Newfie accent! Ah well, I hear I sound funny using words with “ou” in it like “out.”

We checked into a capsule hotel in Akihabara and then went out looking for nightlife. Akiba is still an interesting place at night even if the Maid Café’s were all closed. Unfortunately they didn’t have the type of entertainment we were looking for (live music and/or dancing) so we spent time at a pub. We made some new friends with people that walked in and talked with us, and later in the night we made more friends with some guys off at a different table. This time however the language barrier was even greater, but we still had a great time, and after they invited us for Karaoke! So here we were with strangers whose names we couldn’t remember and who we could hardly talk with, singing English and Japanese songs until 5 in the morning. So much for a quiet night eh? It was really cool.

We had to check out of our capsule at 10, so most of Saturday was spent with red eyes and low stamina. Luckily in my weekend preparation, I found out about a sumo tournament not so far away and we spent the day watching big boys slap each other around. This was my first time watching sumo and it was an amazing experience. We snuck in some naps early on, as the arena was mostly empty when the low level guys did battle. It was hurried along rather briskly and was exciting. One time I saw a skinny dude with huge muscles pick up a big sumo and body slam him like it was a wrestling match on TV, it was so cool. More than once a big man was thrown from the ring and fell on people watching from outside the ring. Many interesting moments all day.

We got our tickets for really cheap, $20. Sure we had to sit at the very last row in the whole place, but they 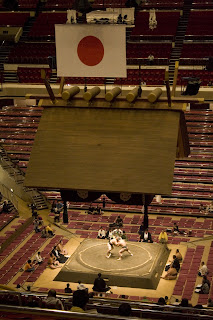 were still great seats, and we had back rests. The people who spent upwards of $400 on ‘booth’ seats had pillows to sit on in little 4x4 cubes closer to the ring. Later in the day as the place started filling up, some of the main events started. One side marched out in super expensive loin clothes and were introduced, then the other side came out and did the same thing, as if there were teams or something. It was really cool to see and hard to explain as they did traditional things like some kind of foot stomping as a team around the circle complete with arm gestures and robe moving. Very rhythmical. (I can feel my English falling apart as I learn more Japanese, please don’t mind my poor grammar and fragmented sentences, and I’m beat tired)

The rounds were considerately longer now, as the sumos weren’t rushed as much and got to throw salt around the ring. It was just great to see the audience get into it as well. Once the middle weight (maybe?) class was finished they had a similar introduction for the main events. There appeared to be 2 yokozunas though, (the big cheese/current champion I guess; remember that old wrestler with the same name back in the day?) which got me a bit confused, and they did their own dance and celebration much to the crowd’s delight. I thought there could only be one?

They would go out and get salt numerous times if they wanted, I assume because they were nervous or something. The one guy staring down the yokozuna on the other side of the mat did this a number of times; and the big monster got angry, flailing his arms in the air. This got the crowd crazy of course, and he promptly laid a smack down on his opponent. We saw similar psyching with other sumos, and sometimes they lost right away which was funny.

At the end of the event, the yokozuna got a string less golden bow to do a dance with, and again it was neat to see and hard to describe. The pamphlets talked about how many of the things they did were spiritual in nature, from the sipping of water before battle, to the throwing of salt to purify the ring from evil. I’m really glad I finally got out and saw this, sumo is hard to see I think as they don’t have too many matches/ tournaments a year.

We wanted to go out that night for some Tokyo nightlife, and now a year later I can finally say I did it! The result: pretty horrible. First we spent 3 hours trying to get to a place (long story) and in that time saw a lot of things we wish we didn’t; like an old drunk foreigner horribly harassing some young girls trying to relax, or people just being jerks in general. I guess Shibuya is a rich place full of snobs… and a lot more long, awkward stories that I just deleted. Eventually after a lot of time, we went to a place that came highly recommended to us: a club called “The Womb” which was made famous from a movie.

We got in a little before midnight for the low low entrance price of… $40. Well, ok, this better be good right? I mean everyone talks about it. My stomach dropped for 2 reasons when I saw the dance floor. One: It was an absolutely massive box, 3 stories high with a disco ball twice as large as me creating an amazing light show. And two: there wasn’t a soul in the place.

I panicked a bit and wanted us to go get our money back. Apparently nightlife doesn’t really start until after midnight or 1 in the morning though, so we were the first of a huge trickle of people that filed in. The drink menu was small and expensive, but oh well, I only had a couple anyways; I wanted to dance! The DJ was rather horrible at first, playing things like jazz and constantly stopping the music to assault your eardrums with something horrible. It got a little better I guess so we stayed optimistic. Dougal and I got out on the floor and really tried to have a good time, but after a couple hours of this, we couldn’t fake it no more. We were extremely disappointed and wanted to punch the DJ so we left.

I could go on and on about the things he did poorly, but it was more than just that. Guys outnumber girls at least 3 to 1, and most of the guys that were there were just annoying; either pushing/walking around the dance floor constantly (almost nothing wrecks your dance flow more than that) or just being drunk and annoying.

We hung out outside and saw many people who were in the club with us walking around the streets shortly after; I guess they were fed up too. We contemplated our options and decided to take a taxi back to our capsule and try and get some decent rest; the taxi (only?) cost about $50 and we were in bed by 3.

Sunday was a bit of a blur as the exhaustion was taking its toll. We tried to go to the maid café, but found its prices and lack of food selection poor motivation for us. Sure you’re not going there for food, but we just weren’t feeling the love. I’ll have to go another time maybe, and have cute girls in frilly maid outfits and cat ears say “welcome home master” in Japanese then.

We did some shopping in Shinjuku 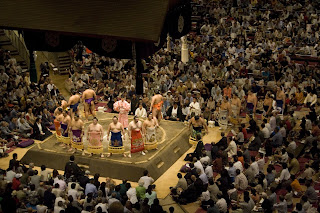 and both got on buses rather early; around 3 to go home. I lost my camera on this trip and had to buy a new one, so this was another really expensive trip for me, but it was still a good time; and the shop gave me some free items when they found out how new my camera was that I was trying to replace. In its short stay with me I got in over 2000 pictures though. The pictures I posted were taken from Dougal's camera.

Friday night I got home and hoped to unwind with a movie, but got a phone call from my sister Patty! We talked for a while, and ate together; she had a 4-in-the-morning snack and I had supper. I had a super busy day at work today, met up with some friends after, then some more friends after that, didn’t get home until after 9 and here it is almost 11 now and I have to wake up in 6 hours to hike a volcano. I guess I’m getting a crash course on scheduling my life. I’m so tired.

"The challenge is not to manage time, but to manage ourselves." -Steven Covey