The only ‘speed’ your doctor will recommend

I think I see a pattern here; here we go: Saturday I got on a bus and headed to Nagoya, that cosplay-friendly hotspot 3 hours southwest of me. It’s been getting cold lately back home, but here in Nagoya it’s still humid-astic! Either way my experience here gave me a good, hot city to compare others to. (“It’s almost Nagoya-hot today!” har har) Walking from the bus stop to the train station, there was this cute girl with a Mrs. Claus style skirt on waiting for the walk light. She stares at me and smiles. Yup, it’s going to be a good weekend.

So Saturday I arrived, and tried to shop for shoes. My current pair has been faithful to me for over a year through 5 different 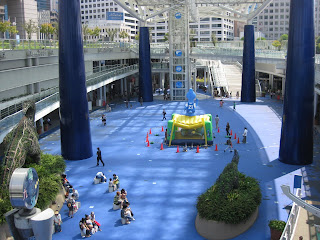 countries, a marathon, icy winter, torrential rains and so on, but they’re showing the love. Either way, it was a different experience for me to walk around a shopping mall... and feel like everything I needed could be found here. Unfortunately my list of ‘things to get’ floated away along with me feeling like I was camping in my breezy wooden house with no insulation; the feeling I had the first month or so in Japan. Ah memories… (spiders!)

The mall was fun I guess, I mostly liked looking at the girls though. They wore thick toques and cowboy boots and fuzzy pink short shorts and other fun stuff. I wasn’t really a tourist though and didn’t take many photos on this trip. I tried to plan for Nagoya as I have previous excursions, but bigger more demanding fish lay on my plate this week which included but weren’t limited to a trip to Okinawa at the end of the month! Yay! That will be awesome, I’ll get my diving license and stuff.

And so I hunted for shoes! I found out my time spent in these stores could be real quick as soon as I asked for my size (size 29 apparently). They would then show me 5 pairs among the hundreds displayed to choose from. I could narrow it down further by telling them I live in Nagano and experience, *gasp*, ice in the winter. Well there went the rest of the selection. It was funny to note too the one store only had basketball shoes in my size. Because, you know, big people only need shoes to play basketball.

I did buy some stuff, like a wig for my Halloween costume and other little things. I checked in to my capsule hotel for the night and headed out for the night’s main event: a speed dating event I found out about online.

I think I’d normally be embarrassing admitting to something like that, but what the hell. Either way this was my first time participating in an event like this, at the very least I’d meet some new people. They gave you 3 minutes to talk and then rang a bell. This was really annoying as you could hardly go through your hobbies and ask a question or two before you had to move on; let alone take notes so you could remember who’s who so you could mark ‘interested’ later.

After the 20th person or so everyone was getting pretty tired already and it started to show, as the one girl I talked with talked about taking pictures of whales the whole 3 minutes. We had a break half way, and a slightly longer chat with one of the girls reminded me that I can’t judge ages at all with Japanese people; she was 34 and looked my age.

A common theme was everyone’s shock that I had hopped on a 3-hour bus to go to an event like this. The one girl actually started laughing a bit as I died a bit inside. I mean, should I really have to hop on a 3-hour bus and spend a couple hundred dollars to meet people? Well… I’m sure I had other reasons for visiting Nagoya, if for nothing else to get out of Tatsuno, and try to end that look of shock and horror I keep getting from the students when they find out, again and again, I’m single. Ya, no pressure, although you should have seen how surprised the latest batch of kids were, they were speechless for a minute or more. This was nice actually, because I didn’t have to break them up from speaking Japanese for a while. Maybe I should advertise that more freely.

I think a couple more funny things happened but let’s move on. Drained from the event, I had an early night at and went to the park Sunday (when I wasn’t searching for shoes in vain, I’ll just order a pair on the internet) and watched some Brazilian themed entertainment. 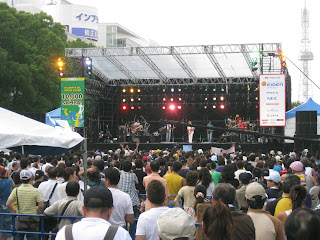 There was dancing, a live band and other stuff I guess, I couldn’t understand the Portuguese that was floating around all over the place; strange how comfortable I’ve become with Japanese.

Most of the day though was spent at a large shopping district called Oasis 21 reading a book and people watching. Normally I’d be running around like a chicken with its head cut off, but this was going to be a relaxing vacation. I hoped to go out that night, but got sleepy from the onsen and the heavy reading material, and I was in bed by 8.

Which brings us to today. I am typing this as I wait for my bus to take me home, as it was a long weekend. I spent the day again at the shopping center, although most of the day was spent studying Japanese. I reviewed over 600 words and a couple chapters in my textbook so maybe I did good if you don’t count the burnt out feeling right now. Viva le Nihongo!

"Life is an adventure to be lived, not a problem to be solved." -Unknown