After swearing to never take one of those buses again, we got plane tickets for Hanoi, Vietnam’s northern capital for around $60. Our booked taxi took our money and never showed up the day of, so we were lucky to use the hotel’s own taxi to get there on time. I guess we should be happy our plane tickets were valid at least.

Hanoi, from our travel books and the Internet, easily had the longest list of scams to watch out for. It was common to see 2 shops beside each other with the same name, and one would be like “recommended 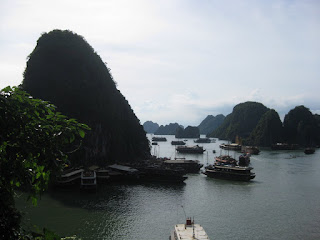 by lonely planet” and the other would say, “We moved! We’re here now!” oh and whenever you wanted to buy anything, the owners would talk to each other first, deciding how much to overcharge you before giving you a price. I didn’t mind the city too much I don’t think, but even I was getting at my limit with having shopkeepers hate me and loving my money. (I suggest skipping this city).

We ended up walking for hours in Nagoya-like heat (easily the hottest conditions I’ve ever suffered through). Thanks to our guides and tips though, we were able to avoid many scams, although there were people with us that fell into some traps. I couldn’t do much but give out a silent “ooooh” and grimace in pain when the airport taxi asked where our hotel was and some Germans behind us told them; we got out and walked to our real hotels, leaving those poor tourists behind. I won’t go on and on about the scams, just make sure you’re prepared, or send me an email or something if you want more info.

That said, not much happened for the rest of the day other than getting settled in. We needed to get an extra towel for showers, and this super cute girl behind the desk helped me out. (helped me get a towel :P) She was something else, but I was taking it easy after all I’d been through recently. Later as I was waiting at the bottom of the stairs for Neal or whatever, she came up to me, looks me in the eyes and has this huge smile while she says, “you are so handsome”.

*cough* I’m out of words for how much I miss Vietnam.

We had a great exchange for a while, annoying Laura and Neal again as they wanted to get going, and here I was flirting with another super cute girl. I don’t know what it was, but she had a way of looking into your eyes that trapped you, making the rest of the world feel oblivious; I don’t know how much time passed. Anyways, I was a bit safer this time though, as she had a boyfriend in Saigon, and you’re probably tired of hearing about how I keep striking out so I’ll cut out the rest of the girl stories from here on.

The next day, Saturday the 16th, we headed out on a tour which was our main reason for visiting Hanoi in the first place; Ha Long Bay. The 5 of us again hopped on a 3-hour bus ride to the ocean and boarded a junk for the next couple of days. Coupled with the dong jokes, the junk jokes were relentless (‘Come ride my junk’, ‘this junk is all wet’, etc) and Neal set up a point system for how many times you could say ‘how long’ while we were in ‘Ha Long’ bay. It’s interesting to note too, that corrupt police stopped our van and hoped to shake us tourists down for bribes; granting us a sticker valid for one day saying how we’ve already bribed the cops, so leave us alone. Our tour group called the head of police or something and told them to screw off so we ended up being ok. I guess they’ve cracked down really hard on bad cops lately.

The junk ride started with a tasty lunch, and a casual float to a monstrous natural cave. If you don’t know Ha Long Bay, it’s been in a couple movies already. Not unlike the marble mountain, there were spear-looking mountains jutting up and out of the ocean. It was phenomenal floating around slowly on the water, surrounded by cliff-islands extending 50-70 meters into the sky. I couldn’t tell how far they went up, but it was awe-inspiring.

Once in the cave, we took a small tour. It was a really neat place, but it was rather unfortunate that some people etched their names, or broke off pieces of rock 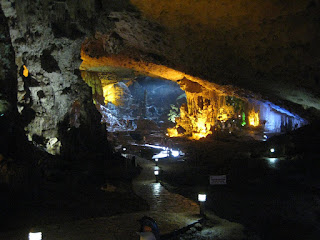 for souvenirs. At least you could hardly notice these things unless they were pointed out, and some of the etchings went back to the early 1900s, proclaiming young love and other “I was here” statements in several languages. Mostly French though.

After this, we boarded kayaks. This was my first time on one, and it was really cool! I have no pictures though, as I didn’t trust having my camera out near so much open water. Either way, that was one of the coolest experiences, floating so close to cliffs that rose so high. It looks even more impressive when you are a couple centimeters from being in the water yourself. If you went out for a bit on the kayak, you could find additional caves in these cliffs and paddle inside. Neal was my partner, and we went into the first cave we saw. We didn’t stay long though with all the cave drippings I was feeling, not to mention the new sounds: the sound of hundreds of bats.

We dared not go into the water, as we saw jellyfish everywhere. A couple times we saw small jellyfish float right underneath the kayak, and their tendrils were as long as the 3-meter kayak. Since we were on the 2-day tour we went kayaking, but those on the 3-day tour went to the nearby beach. Jellyfish stung 4 of the 5 people that went to the crowded beach. The one girl, Rie, a cute engineer from Tokyo, got stung just walking around in shallow water by a jellyfish she couldn’t see. No thanks I say ^_^

Floating out on the water too was a small town. They had their boathouses close together, floating merchants, dogs and other interesting life accessories. 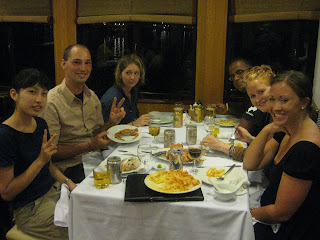 We had crab and other good food for supper, and enjoyed the night on the top of the junk with drinks, enjoying the great weather and full moon. One of the crew came out later and sang us a Vietnamese song, along with sharing stories about Vietnam. We were on board with a lot of interesting people.

It wasn’t too late of a night, as we wanted to watch the sun rise in the morning. It was a bit cloudy but I had good company so I didn’t mind. Later the junk stopped for a bit so we could jump off and take a swim. I jumped from the top because I was heckling a cute girl from Hong Kong named Anna, but it was damn scary. I did it somehow, forcing the issue out of my mind as I extended my foot and stepped off; very much like Indiana Jones. Luckily there were no jellyfish and we had fun swimming in the ocean until the captain got angry at us to get back on, I guess he was behind schedule in his cattle-herding operation.

That night in Hanoi we went to watch the water puppet show; a Vietnamese specialty. It was really, really cool. They played live music and ran little skits with these adorable puppets as they hopped and skipped around the water telling stories. For the first part of the show we were all mesmerized, and later on we were all sleepy as it was really relaxing and almost hypnotic in nature. Easily worth the $2 dollar admission price or whatever it was; I highly recommend it to anyone.

Monday the 18th, our last free day in Vietnam. 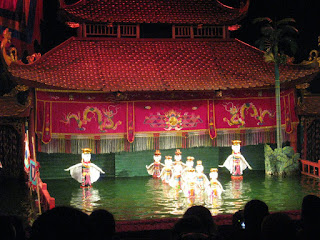 We wanted to relax and enjoy it for what it was. We finished our shopping and saw some sights; whatever was open on Monday that is. Lots of museums and what not were closed already like Ho Chi Mihn’s mausoleum, where you could see his body unnaturally pickled in a crystal or whatever. (Goes to Russia once a year for “maintenance”). Rules to see him were super strict too: like no smiling, no talking, appropriate clothes, and on and on.

We did get to see an ancient university and other cool sites of local things. Hanoi is much different from Saigon. That night we made a try to find some dancing as it was our last night. Earlier, another random cute local gave me some advice about places to go to. The first place we went to had security like crazy including hand held metal detectors. Once inside, the place wreaked of cash. There were many girls up dancing on an elaborate stage like something out of a James Bond movie. We got a glance at the drink menu, and prices started at $70 for a shot of whiskey. It was interesting seeing a menu so casually that had so many zeroes on it. (1,800,000 Dong for a cup of wine anyone?)

We got out of there as fast as we could, lest there was some hidden entrance fee or something used to normally keep out every-day rift raft like ourselves. We tried for another dance club that ended up being closed, and the 3rd one maybe didn’t exist, at least according to any locals we talked with. We cut our loses, and went to a bar owned by an ex-pat apparently, where we had half liter jugs of drinks as strong as we wanted. “give me a taste and tell me if you want more whiskey” he would say. I talked very briefly with him, I guess he’s been living there for six years now. Neal, Laura and I sat out on the patio enjoying our drinks watching the traffic going by and enjoying warm reflections. It was a fitting goodbye to one of the best trips I had ever been on.

We left Tuesday and I got home around 1 in the morning, although after laundry and unpacking I wasn’t in bed until almost 3, time enough to get up at 7 for ‘work’ the next day, which had me sitting at my desk and starting to type up this series. We could have stayed longer, we should have stayed longer, but office politics and contracts have the last word eh?

One week later now, and I’m still rather unsettled with being back; remembering the finer days of ‘the summer of my youth’ as they’d say in Japan, reminiscing 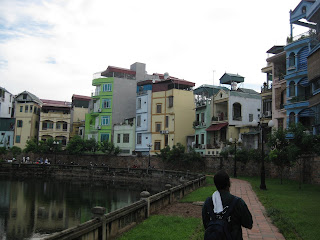 even now as I type this. I am a different person now and I’m noticing new and different things around me all the time. I now start the second year of my contract and have only about 50 weekends left in Japan that is certain; will there be more? If so, where will I be and what will I be doing? So much to do, so little time.