The overnight bus was comfortable for my average-height friend, Neal. For a tall guy like me however, it was a long, excruciating 15 hours. At first I couldn’t fit in the ‘box’ like sleeping area without my skull making love to the iron bar located above my ‘bed’. This long trip saw a lot of bumpy roads as well; at some parts when I’d look out the front window it’d be easy to confuse us driving over something worse than a pasture. Sure these patches were small and few in between, but they still existed.

I saw my neighbor had a bit more clearance in his box, and I slowly kicked out the bottom of mine to afford my body an extra 5 inches of clearance; at my feet’s expense as they were now wedged in a tight place and needed to be on an angle….

I just realized how much and how long I can ramble about how bad the ride was so I’ll cut it off here. We stopped for lunch at some place at midnight. I was 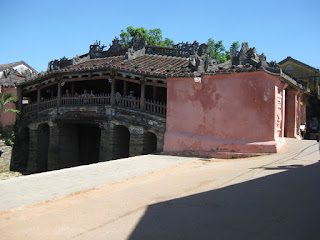 the walking dead of misery at this point and got a bowl of noodles. While I was eating Neal watched the biggest cockroach he’s ever seen run across the floor of the place, and then an equally large rat catch it and eat it shortly after. Good thing I was oblivious to this; it was still tasty. Oh and the few rats I did see in Vietnam were about the size of pop-eye’s forearms. (New experiences eh?)

On the bus ride (from hell) we met up with some very seasoned travels with great stories and lots of experience to share with us. When we arrived at our destination on the 13th, Hoi An, we got a really cheap room at a really great place called “Phi Phi” thanks to them. (Discounted from $25 a night to $15 because they were there last year) I had to go to the bathroom, and when I came back Neal and our new friends had already set up a new harem for me. There were 5 or 6 single, young, gorgeous ladies in beautiful traditional Vietnamese silk dresses that gave me googly eyes and nice smiles for the rest of our stay.

We were still ripe from the bus though and couldn’t check in for a few more hours since it was so early, so we went out exploring. Which was a good breather for me, as all the ladies had me beat red a couple times with the questions and flirts; the head girl started calling me ‘honey’. Her name is spelt ‘Dung’ but sounds like ‘Youn’.

Anyways, digressing again, Hoi An is maybe most famous for its ‘ancient’ buildings and great tailor shops. Being able to make great knock offs is something Vietnam takes pride in, as you could buy some amazing custom made clothing for cheap. I ended up getting a suit vest, casual pants and shirt made for $70, and I could have probably got it cheaper had I haggled more but I was so tired from the bus still. Oh and Neal went to work again on starting another harem for me with the pretty ladies working there. It ended up with 3 really cute ones standing around me and asking me to pick one to be my wife. The one I ended up picking had a husband already so I played into their joke of polygamy, suggesting being a second husband as they were saying earlier they would all be my wives. Great senses of humor, I hope they were joking. Kinda. ^_^

Leaving my 3 new wives, we made our way out to the old quarter with the ‘ancient’ buildings. They were really just a little over 100 years old, but because of Vietnam’s not too distant past, they are some of the few intact old buildings that survived. Either way it was pretty I guess; if you’re into architecture and stuff. There was a Japanese bridge here too which was suppose to be famous, or something.

At lunch we went back to our hotel to check in and shower finally, when we ran into another JET (Natalie) and her friend, Leslie. Small world eh? After the short reunion we decided to meet up that night for a night out in the old town. It was illuminated and rather pretty. Our restaurant experience 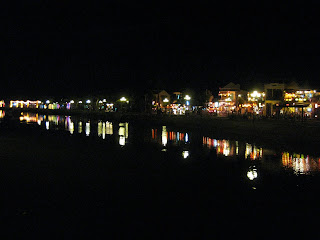 maybe being the best part, as the 2 hostesses were a bit crazy (I think one was drunk). She would try to shake my hand, then go ‘phych!’ and pull her hand back to stroke her hair instead; she got me twice this way before the night was over. Oh and she would tap my shoulder and walk away too.

We had more than a couple humorous exchanges, and the other girl was telling Natalie that she was pregnant, how she was sick, and what her symptoms were before we left. Good times. We did a couple more things before turning in, like going to an all foreigner bar minus the staff, and an ice cream shop. The bar had weird paraphernalia from the war and other interesting decorations. Oh ya and Laura was with us again as we saw her walking randomly down a street earlier in the day and called her over. Now our group was 5 strong.

So now it’s Thursday the 14th. I had a nice chat with more than one of the cute hotel girls while having breakfast and we set out to rent motorcycles! The streets weren’t as crazy as other cities and we figured we needed to give it a try. It was $5 to rent for the day I think, but when it came to getting gas they ripped us off again because we were foreigners. I think I spent $5 for 2 liters, and they tried to get twice that. Anyways, we went to our hotel quickly to get stuff for the beach! Why not eh? It should be a good day out. When I was heading out one of the cute workers came over and invited us over to her place.

Heh, what? Alright! After a bit of confusing talk, Neal and Laura opted to take off for the beach, leaving me to fend for myself with the lovely Sau and Phuong (sounds like ‘foon’) for the rest of the day. At first they needed to change out of their silk dresses so we went to Phuong’s place first. When on the bikes, the girls dressed in a lot of clothing even though it was hot out. We’re talking facemasks, gloves and the works; the only skin you could see were their eyes shaded by the helmet. They later told me that pale is beautiful in Vietnam, so girls do what they can to avoid the sun, mostly while riding their big rigs. A common trait in Asian countries it seems.

We then tried going to Sau’s place, but my skill with the motorbike was obviously lacking. Phuong offered to drive for me and I happily obliged. We got there and I met her parents right away, which I half expected but it was still kind of strange. We had some refreshments, had a good talk, and then headed a further North to climb a Buddhist mountain called “The Marble Mountains.”

We went to the town Da Nang to do this. When we arrived there were marble shops everywhere with amazing sculptures. I didn’t care too much though; I had two pretty escorts ready to do some mountain climbing 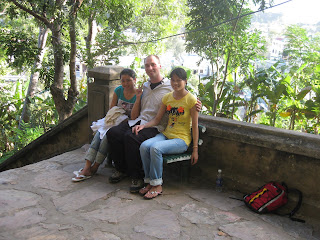 up the amazing looking mountain. These hills looked like large spears shot up and out of the earth, surrounded by flat plains. It was a very interesting climb, and rather difficult at times as we were literally crawling through small holes I could hardly fit through at steep angles. We made sure to get lots of pictures ^_~ group/couple photos are rather popular it seems. (Sau's on the left, Phuong's on the right)

The middle of the mountain had a huge cave. Inside were more statues and I watched with interest as they showed me how they pray with incense and such. While we were there a large group of monks came to pray, I guess they were on a spiritual journey to many shrines and didn’t stay long.

We took a break from the climbing and had more great conversations. They were 23 and 22 years old, and they had only ever been to Hoi An and Da Nang in all their lives. I showed them pictures from my camera (a thousand at this point) and they went through all of them. It was interesting to see how surprised they looked to see places that were really close in Canada’s standards (8 hour drive to Edmonton anyone?). I encouraged them to travel more; although I remember how tight money was for me at that age; not to mention time with how hard everyone works.

We later went for lunch at a really local, and really small restaurant. The food was great, and I asked the owner to take a picture of us. It was interesting to see her try too, as if she’s never picked up a camera before. Napkins were square cut outs of cheap paper, and once used they were thrown to the floor. Needless to say I had numerous cultural experiences thanks to these lovely ladies. I was a little sad they kept paying for me too, I felt like I was the one indebted for all they were doing for me. I sure got a lot of free things that day no matter what I tried.

That night there was a full moon festival in the old quarter, celebrated a day or two early for a large Japanese-Vietnamese friendship festival or something of the sort. Sau had to go home, but I was still escorted by Phoung and now Dung. It was really nice walking around again with all the people and festivities. Although Dung has lived there all her life, she said this was the first time she was attending the festival, and it was mostly to help me out. People really go the extra mile for you here. (I think she was playing matchmaker for Phuong though as her English was really good).

One of the festival’s events had you put on a mask that blinded you, and you had to listen to the crowd help you stumble blindly towards a drum, and try to hit it. Dung tried her best to help me, but other people were screaming other things to throw me off, including the guy on the mike. I ended up getting really close though, hitting the top rim of the drum and not the center. “Tony, I’m your friend! Go right! Go right!” was drowned out or quickly mimicked and wrecked by the mob ^_^

After that, we rented a boat for a nice little float down the river. We were given lit lanterns. With them, we placed them out on the river and made a wish. It was really nice. When we got off, we were in a rowdy area, but still rather tame for my standards. 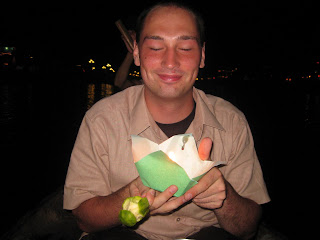 Dung warned me to watch my wallet because of the all the people, and we plowed through. It was interesting to note how much of a ruckus it was for them, as I guess the only city life they’ve known were these small, and somewhat quiet towns.

We called it a night, and Phuong and I had a rather difficult goodbye. It wouldn’t be right to talk too much about it here, but we had only about 4 days or so left in Vietnam, she was working 12-hour shifts for the next couple days, and tomorrow’s plane tickets were already bought and paid for. It was time to march on. :’(

“A culture is its people. You need to talk to people before you can get a feel for the place.” -Neal Murugan