I could complain how my last day off was Sunday, July 6th and the first day I will be able to sleep in won’t be until July 26th, but for working these days I will get extra holidays for a trip overseas in August. For some reason I was keeping it as a surprise (although in retrospect I’m not sure why) but I will go to Vietnam from August 5-19. Either way last night I got home surprisingly 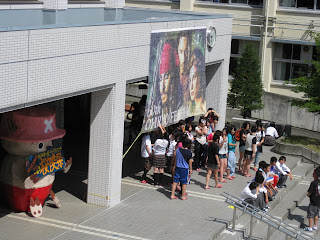 early and used the time as much as I could to do nothing; explaining why the post is a day late as I’m at school again right now. I can hear the students splashing and having fun in the school swimming pool and I am madly jealous, but that’s all right. It’s really hot out; there was a day last week I couldn’t get much sleep just because I woke up sweating. Electric fans save the day, not to mention me being in the elevated mountains and not a sweat barn like Tokyo or Nagoya. (Or so I’m told. I don’t want to even think about Okinawa, the islands in Southern Japan)

A day last week they asked me if I would like to use the school pool. I happily jumped at the chance and swam/floated around for an hour with my inner tube that I bought, hoping to float down the river with beer and friends last weekend had I not been at a festival. Ah well, at least it got some use. I set it up in a cool way where my whole body was under water sans my face for breathing. It was a new experience being in a large pool like that alone, it was so quiet. I floated there staring at the big fluffy clouds lofting around the deep blue sky, hearing absolutely nothing but small movements in the water caused by the wind rolling off the surface. This was accompanied by my own heartbeat, seemingly amplified in the liquidy coolness. Later I tried swimming for a bit, diving and what not, then when I tried to do one of those turning-moves at the end of the pool, I smacked my head a good one on the bottom. I called it a day ^_^

Japanese is sticking to me like glue now, and I surprise myself daily at my newfound abilities. Watching anime has turned from maybe understanding a word or two, to actually learning new words as they’re used, as the sentence structure and patterns have become more familiar. It helps too that everyone is so excited I’m learning and are willing to help as much as they can. When I tried this in the past, it was so easy to get overwhelmed with all the different conjugations and variations of the exact same thing; but intimidation will only go as far as you let it. I got tired of telling myself how I was going to do things differently, only to go back to old bad habits the next week, but now I’m finally taking steps for long term change. Needless to say the last couple weeks have been pretty exciting as I see the changes start to take effect.

I always knew the students wanted to talk to me, but it’s easy to forget when it’s hard to get them to answer how they are that day; a question I give everyone. ("I'm find thank you, and you?" is pretty standard.) Now that I’m trying Japanese, it’s amazing to see the students’ transformation and renewed effort to communicate. Last weekend the students made the 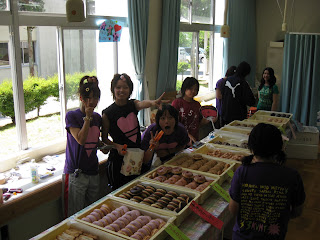 festival, and this weekend it was the students again that made it an incredible experience. Now I only hope I don’t use too much Japanese with the students so they still try to learn English; I feel like I’m constantly translating what I’m saying to them, as I’m translating it in my mind anyways. Exciting times. As long as I keep my Japanese out of the classroom I think it should be fair game maybe; some communication is better than none, and they seem to try harder this way.

The festival at Tatsuno this weekend was fairly different from Yayoi’s. The first day had a three-hour opening ceremony to kick off the events, then Sunday was open to the public and the day was really packed with fun things to do. Monday saw a couple hours of cleaning in the morning, then intense relaxation for the remainder of the day. I was a lot busier this week in the buildup, as I had a much bigger part in helping set up the event. I made a couple posters and helped decorate a room.

Most of the festival again saw me wandering around talking with the kids and trying out all the neat things they had prepared. There were cool displays that ranged from a life size anime character, to a massive picture collage of a “Pirates of the Caribbean” poster. There were bands, dancing, drama and speeches again, and they even called me up on stage! I was surprised so I rambled a bit when they threw softball questions at me like “Do you like Tatsuno” and “will you have fun”? I even joined in on the dancing this time and had a great time, despite the one dance being too complicated and having too many people confused as to what the steps were. Again I had lots of food and most of it was really good. They had a pizza there though, that used rice instead of dough! It still tasted pretty good, which reinforces my belief that good sauce and toppings are all you need.

There was no massive mud fight at the end as a student got hurt a couple years back, so I’ll have to wait until next year to give it a try. I’ll be sure not to get sun burnt again. The air is so humid here though, as normally a burn as bad as what I had would have peeled off after a day or two. Here I hardly had any peeling at all and have turned a dark brown instead. A tan that works! I might care more if I liked tans though… I’m always reminded of leather-faced girls from when I was in high school that tanned too much. Someone told me tans are a sign of being ‘fit’ or something, but to me no tan means soft skin ^_^ I guess I’m in the right country for that though, as many people will use umbrellas on sunny days to keep the sun off them. Only those hardcore with soccer or baseball are a dark brown it seems. It was 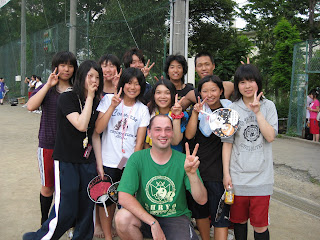 funny too as they tell me they’ve never had a sunburn peel off on them! Humidity has its uses I guess.

One of the games set up at the festival had to do with points and quizzes. It was the first time I got quizzed and had to answer in Japanese, and I got half of them right! Sure they were easy like “who is Mario’s partner” (luigi), “which ear is Hello Kitty’s bow on?” (left) and “what happens to Pinocchio’s nose?” (gets big when he lies). The questions I got wrong I simply didn’t know like “who is Hello Kitty’s little sister?” (mimi-chan (means ‘ear’)) and “who are Anpanman’s sidekicks” or something.

It was a good week, and this is the upcoming last week of classes before the summer vacation. More good times on the horizon.