The sea better known as Disney’s

Last weekend Neal and I went to Tokyo to experience the second part of Disney’s offering. We spent the night in capsules that were a little higher tech than the wood boxes I had slept in before. These ones were molded from plastic, had radio and tv inside, and on 3 of the 10 channels you could cycle through they played non stop hardcore pornography; censured to Japan’s laws of course. There were other channels like I mentioned… but for some reason I can’t quite recall what they were… I think one played Wimbleton tennis or something.

Regardless we didn’t spent too much time in the cubes aside from sleeping, as if our last outing was any indication 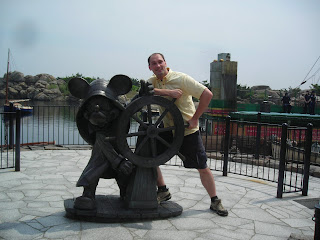 we were on a mission to hell and back. Aside from the blistering heat and a level of humidity I’ve never experienced before in my life, it was a bit better in terms of crowds compared to our outing at Disney Land almost a year prior. We saw most of the parks attractions and had a wonderful time. This one ride “journey to the center of the earth” strapped you into this mining cart that was rather versatile in terms of speed… and crazy drops. I lost my composure in the panic and had weak knees for the next while ^_^

Not to be outdone, we somehow forced ourselves onto the “tower of terror” where you free fall in an elevator shaft. I thought I looked hardcore in the picture they took, as I tried to take myself out of my body as much as possible to lessen the shock (think happy places) but that impression diminished quickly when you looked at the whole picture where the majority of people had huge smiles and their arms in the air to force out as much adrenaline as possible.

The heat was so intense, and again this humidity is so new to me. I’ve never had a shirt soaking wet all over at night like that before, and I’m getting strange new skin conditions I’ve never really seen before. I sweated up a storm as well so it was good I had lots 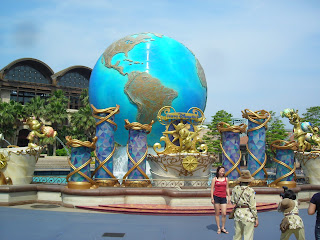 of water and that there was overcast or else I’d be more sun burnt than I am. Neal gave me advice to condition for our upcoming summer excursion overseas, as our destination will be much more intense. (summer is my least favourite season of the year)

A lot of other stuff happened, but this will have to do. I'm going through alot right now and it was really hard to even post this for some reason. Either way it was a good weekend.

"Simply put, you believe that things or people make you unhappy, but this is not accurate. You make yourself unhappy." -Wayne Dyer