I scare Japanese people, and I got my license!

Hello again, Gary (my cousin) gave me the good tip of being consistent and I think this 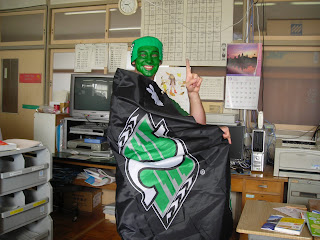 will be something of a good routine for me. I *hope* to update my blog on Mondays as it is right after the weekend and I have some time at Yayoi to work on it usually like today. So that would mean Monday morning readers in Canada, in theory, should have a new entry ready. I will post pictures from October and possibly some more from early November as I mention a temple later on so that way you can see what it looks like. If I have time I will start posting more videos although I don’t take them very often anymore. 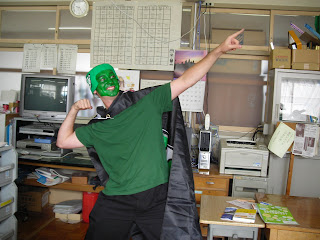 come and gone now, and I maybe scarred some people for life with the shock of a painted green face walking around. Some of the reactions I got were priceless. They ranged from students spinning around and screaming at the top of their lungs to teachers giving a quick look from the corner of their eye then instantly jumping back with their eyes wide in shock, bowling over the students next to them (best double-take ever). I remember Neal (fellow JET) telling me once how Japanese people were easy to scare and I think they even have Patty beat (my sister) but it’s hard to say; Patty screams in horror at anything, it’s great.

One of the cooler reactions was some students caught a glimpse of my cape flapping in the distance as I walked across their view. They paused and excitedly started wondering out-loud what the heck they just saw. Remember, I’m acting like I’m completely not out of place as well, unless 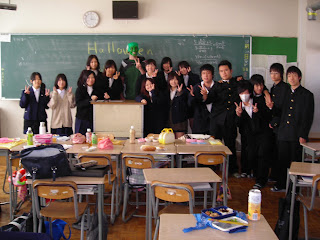 of course they wanted me to pose then that was another matter. I think the part they liked the most (other than the green face) was when I told them my cape made me fly. ☺ It was fun trying to explain how I was a “crazy Rider/football fan” and student’s guesses ranged from “superhero” to my favorite: “Green Machine.” Haha, technically I guess that is correct, although you don’t hear green machine too often anymore; pretty classy at any rate. A lot of the time people didn’t know what football was and I was having enough trouble explaining that Canadian football is “a little different” from American football.

I told my students to dress up and they will get candy from me. I only had 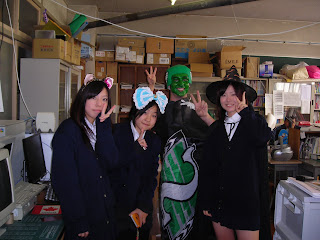 three follow through but that’s alright and I gave them candy. I gave the rest of the sweets out to students who would say “trick or treat” or as prizes for Halloween themed hangman and what not. Speaking of which I’ve had to teach a couple classes how to play hangman which I thought is kind of strange. At the same time maybe not that strange though as my TESOL instructor told us to be sensitive about stuff like that, one of his students ran out bawling because their father offed himself that way earlier that week.

Also some of the classes were getting ready to go crazy with “yay Tony sensei” and stuff seeing my crazy outfit, just to have me respond, “Today we’re having a test! Yay!” haha ah how cruel I am. Before they were bored with the test though I posed for all their keitai (cell phones) as they took pictures. Yes, all the 14 year olds have phones, not that crazy this day and age I guess. For many people it is their computer too for internet use and such. But ya, it was pretty awesome to see all the students line up as say “Give me candy” or “Happy Halloween” until someone would go out and say “trick or treat” and everyone else would learn to do the same. Halloween night Jake came over and we celebrated Halloween by having a few drinks and playing “scary” video games on the old Sega system.

Thursday I had a nenqyu (holiday) to go to Nagano and get my re-entry permit and drivers license. I need the permit to get back into Japan should I leave for any reason; say visit home or South Korea 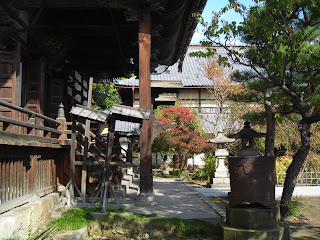 or something. I had time left over and noticed there was a big temple nearby so I went to check it out. It was really neat to be there, it was very old fashioned and looked very good. I took several pictures and then eventually noticed a satellite dish on the roof. Nothing is immune to modernization I suppose.

I caught an hour train to Shinjiku and met up with my caretaker who took me to the driver’s exam place. Again since I’m Canadian the extent of my testing was an eye exam (which I got a perfect score on) and a bunch of paper work. There was a lot of confusion over the picture license and the yearly paper license, the changing expiration dates, all kinds of fun-to-explain stuff like that. After a couple hours it was all good and I got a Japanese drivers license good for 5 years. The only weird thing is since I can’t prove I was in Canada for six months before coming to Japan I have to have “beginners” stickers on my car for a year unless I give them paper work saying I have experience. SGI didn’t turn on their fax machine until 8:30 in the morning (11:30 PM my time) so that was a hassle, still haven’t heard back. Kudos to my Kyoto sensei (vice principal) for staying up that late to do it for me.

So in Japan, new and elderly drivers have to put stickers on their car designating them as such so other drivers know to be careful around them. Young drivers have an arrow fletch shaped yellow and green sticker while elderly have a yellow and orange shaped water drop. Have to have one on the front and the back, mine were cheap and are magnets, picked them up on the weekend. Also every 5 years everyone has to take a drivers test again instead of just simply renewing it like we do. So with a Japanese drivers license I am now legally allowed to drive to school although I will probably continue to take the train. It take almost the same time on the train as it does driving, the only time to be saved would be the actually walking from the station which is about 25 mins total each time. So if I miss the train someday which I probably will then I will drive and try to be on time still. Oh and I found out my transportation fees are reimbursed.

Well enough about that, Friday we went to Ina and did some karaoke until 4 a.m., then that weekend was Japan’s “koyo” (red leaves) which a good time to go and see the trees turn different colors as the leaves fall off. It really is beautiful, looking around at the area and the bright red trees. Japan places heavy emphasis on their three seasons. When 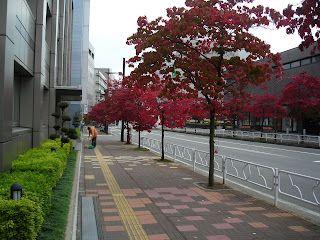 I ask my New Zealand bound students “what can you tell me about Japan” they are advised by Kocho sensei (principal) to share how Japan enjoys 4 very beautiful seasons. I know springtime will be something else with the cherry blossoms but I’m not really seeing the lure of winter or summer, maybe because those last the longest and have more extreme temperatures. Anyways it’s popular to go out and spend time surrounded by nature this time of year.

I was pretty tired from the karaoke so didn’t do much the rest of the weekend except relax indoors. I need to find my kerosene heater as much of that relaxing time was spent with numb toes. It’s usually 15 degrees in my house lately, 10 degrees this morning. I should plug in those pipe-heating wires pretty quick in case it does dip into the minus. Next weekend will hold more adventures with a thanksgiving style feast among other fancy indulgences, even a 3 day weekend I think. Also there is a Japanese festival 7-5-3 happening, will explain more in the next post when/if I have some pictures. I've forced myself to have "lazy" weekend lately to maybe get myself more motivated to studying Japanese and what not, I have to write my first test in 4 weeks and I hope to go to a voluntary class tomorrow night for the first time.

"The difficulties we experience always illuminate the lessons we need most." -unknown

Enjoy the little things in life,
Tnoy
Posted by Tnoy at 1:38 AM