I ate turkey and other goodies for America’s thanksgiving this weekend, it was a nice taste of home although I still miss the proper dressed we enjoyed back home and not the mushy from-the-box stuff. Oh and two different types of gravy! I put it on everything from the salad to the freshly baked Italian bread. All kinds of JETs brought stuff and/or cooked it there. Heh getting ahead of myself though, this all happened Saturday.

The schedule was a little confusing and we got more than a little lost trying to find the place. It was maybe a 2 hour drive but would have been 3 hours by train. Something to get used to while being here for sure, considering the place is maybe not even 100km away. Anyways I was hoping to maybe cook up some potato sauce as other people were doing similar things. We got there at 4:30 and the eating was suppose to start at 4 so I figured I didn’t have enough time plus there weren’t any free pots left so my ingredients sat in a corner for the night, I’ll have to make it later or something. 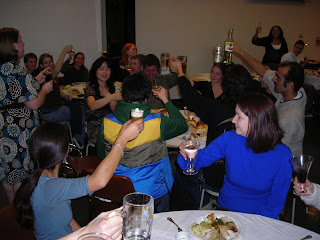 sweet potatoes baked with marshmallows on top, all kinds of pie, salad, vegetables, fresh Italian bread (ficado?), and of course lots of turkey and gravy. I’m sure I missed mentioning some dishes like the stuffing. Brian our PA (prefectural advisor) from Ireland made some Irish coffee. Basically hot water, instant coffee, whiskey and whip cream. It was good, I thought it was pretty strong though.

We were at a community center so there were many people walking around. Some Japanese students got curious and we invited them to join us. We might have scared the one a bit at our table as the drinking got a little intense for some people and the accents were all over the place. We had Australian, Canadian, American an English accents for sure at our table alone. We were suppose to be out at 7 but stayed until basically 8 by the time everything was cleaned up.

There was a board where people could write up what they were thankful for. You had the standard stuff, sure, but the one that really stuck out for me on there was “I’m thankful I don’t work for NOVA.” I don’t know if it’s in the news at all back home, but it’s big time here. If it wasn’t for JET I probably would have went to NOVA as much as I didn’t want to. Before going to Japan I read about sketchy things on the Internet but only recently has it made mainstream news. The company is filing for bankruptcy and all their teachers haven’t been paid for a long time, like longer than a month. There are people walking around cities with “will teach English for food” signs. They are contractually obligated to stay in Japan but they aren’t getting paid. Other teachers have been forcibly relocated as they tried downsizing to make up for the shortfall. One teacher in particular in Nagano was selling all the stuff in his house as they were moving him and you could tell he wasn’t impressed having bought some of these appliances for new not long ago and having to sell them. It’s just a bad situation, I’m pretty sure they have like over a thousand employees.

I’m doing ok as far as saving money is concerned, but I try to live fairly simply. I now do my shopping like an hour or two before closing (coincidentally usually that is the only time I have to go shopping) and there are many things on the discount trays. There is nothing wrong with them most of the time, like the liter jug of pure grape juice I got for $1.30 reduced from maybe $2. It pays off the most with fruits and veggies, as those are normally pretty pricey. I suppose I should start spending more on traveling. Speaking of which, there is a 3 day weekend coming up and it’s been bugging me that I’ve only left the prefecture once already. I will look into it later, should be able to start a road trip.

Little off topic but ya, that Saturday night we went to a local JETs and had something of a house party. It sucked when they played the same crappy bar music that 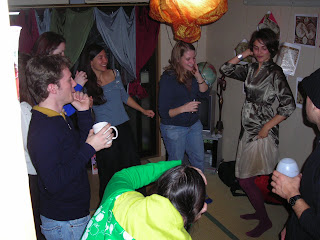 I didn’t miss from back home. They just needed to play that horrible “save a horse ride a cowboy” and I know I would have been in a crappy Regina bar for sure. Luckily later they stopped caring as much and I was able to play some good music ☺ We started raving a bit, Brian and I which was pretty sweet. People commented that watching us was like watching a lava lamp; you get lost watching it. Unfortunately we didn’t have glow sticks; that would have topped everything. We did about 5 songs until the host of the party wanted more “grinding music” and not techno. Fair enough I suppose, it was her house, I would play what I want in mine. It was ok I guess until like 2 songs later they played “who let the dogs out.” Ugh, 80% of the party went into the other room and closed the door trying to keep that music out. But enough about that I guess! Only one weird thing left to mention, a local American came over at like 4 or 5 in the morning after everyone fell asleep and started taking pictures of people. Creepy.

Sunday, the next day, I unfortunately forgot to take a picture of the active volcano in Saku where we were. Apparently it explodes every 40 years and kills people every 200 years. And guess how long ago those things happened? Yup exploded 40 years ago and killed people 200 years ago. And according to our host the volcano went from merely smoky to unbelievably active from the locals as soon as she showed interest in it. At any rate it’s suppose to be pretty cool with a cloud of smoke always coming out of it, it is the most active volcano in Japan. Our host watches it in her kitchen window every morning, pretty cool view I’m told. (Again, I didn’t see it ☹ next time)

I managed to catch an hour ride to a big city where the train wouldn’t be nearly as complicated but got a lesson about catching trains alone, it’s tricky. Got home alright after missing 2 trains and riding one for an hour and a half. The one train Matt and I ran to and tried to open the door, seconds before it started moving. The conductor just waved at us as he crawled by 2 feet from us with his door wide open. Might as well have slapped us. The rides were amazing though, seeing all the trees all over the hills with all the different colors. I wish I got more pictures but I was stuck in the middle back of a car with no middle seat so my butt was sore ☺ A ride is better than no ride though.

Well that was more or less the weekend. Friday night I went out with a local I met last week at the party, 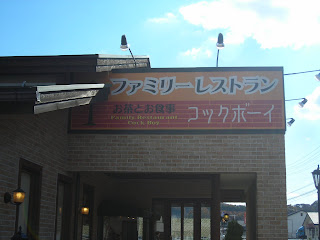 Junko, and she showed me a cool restaurant. We had pork cutlets and they were pretty tasty. Jake is back from Okinawa, I ordered some video games (Mario galaxy, rainbow 6 vegas), relaxed in the one room that I’m heating and have lined the walls with blankets. After this morning though, I’m thinking I’ll need to make a trip to get some bubble wrap.

When I got up it was maybe 2 degrees in my house, no lie. My breath came out in a thick cloud and there was frost/snow all over the ground outside. When I got dressed I immediately threw on 4 layers and warmed up right away. Tonight I think I’ll move my bed to the room I’m heating and I’ll learn how to set the timer on the kerosene heater. You can get it to turn on before you wake up so the room isn’t so frozen, or set it so the temperature doesn’t drop below freezing. I’m just a little surprised it reached this temperature when it did, kind of thought (maybe wished?) it wouldn’t happen until late in December.

Last week was alright, I got a poster finally to hang in my house! I went to a game shop and after a while of asking “okii shashiin moteimasu ka?” (big picture have?) and gesturing with my hands they were still confused. I pointed to the poster outside and was like “Mario galaxy” and whatever else I could to say (read: not much). After confirming a couple of times that I wasn’t after the game but the poster they went to their big stash of posters and gave me the Mario galaxy one, for free even. Well I was in a little bit of disbelief, after semi-looking for over a month I get such a cool one for free. I was so happy I brought it to school and showed it off to a couple people. One was one of my students and her jaw dropped when she saw it. “Tony give me!” heh sorry kid, this one is going on my wall. I wanted more posters but figured not to push my luck, I already just walked out with one for free but I already have my eye on what to ask for next time I go in (a one piece poster, very popular anime). And now I know the Japanese word for poster! “Posutaa” (say it fast) …yea I suck.

I stayed late a couple days helping students with a “step” test, it’s a standard English test some students will take in interviews for entrance into university. 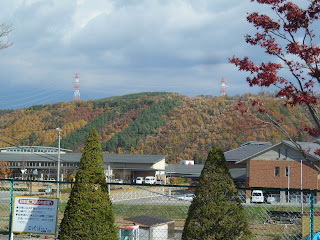 Lots of tests being written, coincidentally today is a test day so I have more time to do noth… study Japanese ☺ yea that will do. I found out today I only have 3 or 4 more classes with my 3rd years then they will be too busy with their University entrance exams. Got me a little down, they are my best students obviously and I won't be seeing them anymore.

Well that’s enough for now; I probably should study for real. My first test has to be done first week in December and I have a lot of catching up to do as was relevant by my quick browsing this morning through the lesson book. It was expect I know a bunch of Kanji that I haven’t seen yet.

"The more you praise and celebrate your life, the more there is in life to celebrate." -Oprah Winfrey

Sounds like very cool stuff going on over there buddy. Good to hear about lots of parties and whatnot. I bought Mario Galaxy on release day over here and have been playing through it with Fiona. It's soooooooo good! Pretty deadly that you scored a free poster too. I'm sure if you told Matt he'd be more than a little jealous ;)

You jerk! Had to rub it in eh?

Haha ah well, I ordered the game too and it is on the way in the mail. I'd be surprised if you guys didn't salvage my cool poster from my room back home yet.

I got a couple new things to hang on the walls, airport souvenir stuff and a Ghostbusters poster now! Eventually I'll post pictures of my house once I nerd it out enough