December was a fun month, even if it felt like full-on hibernation at times. If I get upset about the cold though, I only have to remember the winters I endured in Japan and I’m once again humbled. The powers of central heating are that strong. 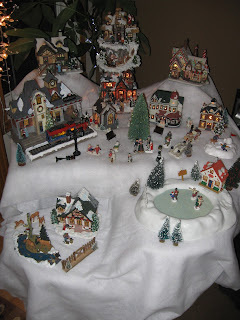 I don’t remember too many things of note other than trying to stay warm in the basement, looking and applying for jobs and not going out much to save as much money as I could. I’ve been lucky the times I have gone out with friends and family, as they usually help me out with the bill. I make sure I stay grateful, and hope to pay back the kindness in the future.

It would be great to go to work again and have a routine. Currently the closest thing I have to a routine other than staying up and sleeping in late is going to the gym with my brother John. Along with the job-hunting, efforts there have increased. I haven’t really much result yet despite the grueling routines, but I keep reminding myself that muscle weighs more than fat, and it won’t happen overnight.

We had home-made pizza, I helped paint a spare room in Mom’s house, I hit level 80 in that Warcraft game and pretty much quit right after. I only signed up because a bunch of friends were starting new characters together, but 2 days in they were 15 levels above me so I’m not holding my breath for a social experience. 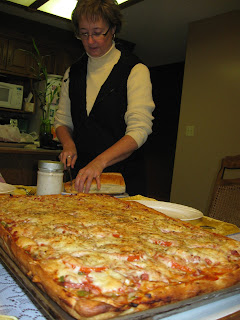 It seems like I’m shoveling the driveway more days than not, and I was asked to look after 2 different people’s cats while they were on holidays since most people know I don’t get out much anymore. It was a fairly easy job, as cats are much better than dogs in my opinion, but that’s just me.

Ann is still working hard, often putting in 12 to 16-hour days at a restaurant for around $1 an hour in Thailand. While she loves the Nanny work, the restaurant is a lot more stable, and she is excited to practice her English with people. She sent a box of Christmas presents for my family and I, but we have yet to open it.

Because of Melissa’s wedding (coming soon!) and the great expense incurred there, Christmas was somewhat “written off” this year. Later we found out Patty bought presents for everyone, and coupled with the stuff I bought in Vegas, it left the others scrambling to get stuff as well. We’ll most likely celebrate after we get back from the Dominican on the 20th.

Speaking of Christmas, this was my first time celebrating it in Canada in 4 years. The first time I missed it, for those keeping track, I was in my office in Japan. The second time was spent on a beach in Thailand with Richard. The 3rd time, in Thailand again, but this time with Ann in Bangkok, and we watched a Muppet’s Christmas Carol on TV. 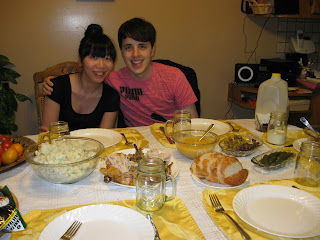 I knew my current state of unemployment was getting especially bad when I woke up one morning wondering if it was Christmas Eve or Christmas Day. It was the Eve apparently, and we went to my Aunt Donna’s to celebrate. It started late and ended a bit early, but it was still fun. Unfortunately everyone had to work that night except John and I, and the first thing that happened to us when we arrived was being drafted to draw straws on the role of Santa.

Now John has been many times before, so maybe it was good I drew the short one. I don’t know why I was so nervous at first after all my performances in classrooms for years. I tried to blame the anxiety on being surrounded by family and knowing they would all understand what I was saying. As I thought, it all went great as soon as I was out in front of them. 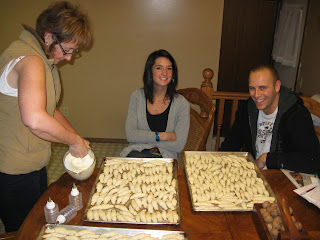 I joked around, asked the little kids questions, and posed for many pictures with various family members sitting on my red lap. I was surprised how nice the costume was, and I’m glad my entertaining skills from Japan haven’t stagnated or were acquired in vain. For example, I had to explain Santa’s drinking problem, as Mazelin, the youngest girl there, recently saw him drinking Tequila on the beach in Mexico. Also, where my reindeer were and what they eat.

As there aren’t many children in the family anymore, my role was extremely short, and it was time to get back to my reindeer. Mazelin was asked to pick a parting carol and chose Frosty The Snowman. “Sure!” I thought, this is a good song, and launched the family into it.

Literally one sentence into the song, I hit a brick wall. I remembered the melody, but couldn’t remember any of the words. I’m not sure if I’ve ever properly learnt them, it is one of the harder songs after all right? I started to drag my lead, looking around the room desperately for someone to take it away. The best effort was by my Aunt Donna, who made it to the 3rd line of the song atleast, to where she substituted the words for “something something.” 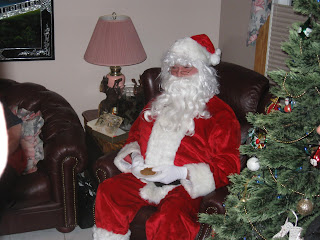 Boy did Santa turn red. We quickly picked Rudolph instead and tried again. In hindsight, maybe it’s lucky I had taught that song to my students the last 3 years or else I would have forgotten the words too. I’m not sure if everyone wanted me to cut it short, or if they didn’t really remember the words as a couple times I was carrying the song alone. I made loud ‘Ho-Ho-Ho’s as I left out the front door, taking Mazelin’s cookie present for me along.

Christmas Day was also a lot of fun, this time on the Schoenroth side of the family at my Grandpa’s. From noon to 7 it was a smaller crowd, and we were stuffed from turkey. John and my dad played against my aunt and I in cribbage, where we were thoroughly whipped repeatedly; I think we got skunked twice. In our final game though, when we were tied and needed 6 points to win, we came through with a strong finish to make up for the earlier wounds. 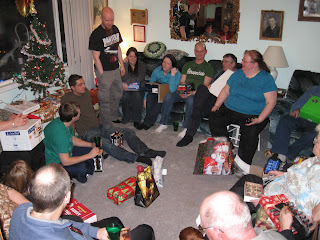 I got to see even more family, but for many of them it’s been three and a half years since we last got together. I got joking around with my cousin Dale and my brother to a point where we were all crying from laughter. It was quite a fun night in that regard, though a bit odd upon reflection.

We played our family Christmas grab-bag game, and I came out if it with the board game “Life.” I haven’t played it in years and I’m still a board game nut, I just need to find people to play with. To finish the night, some of the cousins and I played a game called “Things” in the basement; another game I’m itching to add to my collections. But alas, I need to find employment before spending money on entertainment.

New Years Eve was spent at my sister Melissa’s house. She invited out some people and we started the night with a drinking game. I don’t remember the name of it, but it was quite odd, and I’m just glad we didn’t play ‘Sociables,’ of which the rule sheet was written out and waiting on the table. The game died immediately though, when John added a rule to do 10 pushups at a certain number. 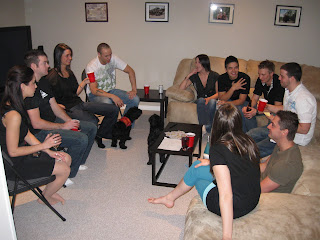 There was some Karaoke, a countdown, shots, and music videos, but maybe the highlight was when a friend of John’s decided to go streaking to bring in the New Year. Now it was frozen outside, but he had a bet with some coworkers and apparently won a lot of money for doing it. I don’t think it would be right to post pictures here, but it was pretty awesome.

So now here it is, 2011. Resolutions? I finished typing this blog days ago, but stumbled on this part. I honestly thought of them one day and wasn’t sure what to make. I guess I’ll continue doing what I’ve been working hard to do for months now: get a job, lose weight, and find a way to be with Ann again.