It feels like I’ve been cleaning for way too long. For two weeks I tried giving stuff away, and while I made great progress, the many piles of remaining items were wearing me down so I started throwing out perfectly fine items wholesale; I didn’t want to be stuck with the hot potato.

I haven’t had classes at Yayoi all week, so after coming in and doing everything needed, I was free to go home and continue cleaning… and go crazy. On Wednesday I finally made my way to the dump expectin 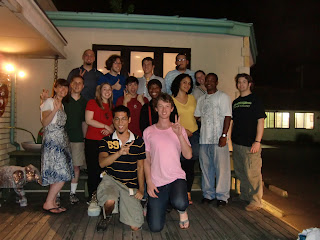 g the worst. It wasn’t so bad though; every 10kg would cost me around $1. I dumped 90kg that day, but discovered this dump only took large burnable garbage. The large non-burnable dump was a ½ hour drive the other way, also neither would take my old car tires.

After seeking help at school, by calling the town office, we have one day every 2 months to dispose of said tires. It would cost $4 a tire, a ½ hour drive into the next town over, Takato, and I only had 2 hours, from 9:00 to 11:00 on Sunday morning.

Well, there went any travel plans for the weekend; a group of folks were going to Nagoya to see a sumo tournament too. On Friday, I got rid of another 120kg, but haven’t really touched my kitchen yet. Brian came to stay at my place, and he helped me clean on Friday. After loading my car with garbage, I loaded his van with stuff I gave him for free. Though to make it up to me, he bought me lunch and made me breakfast a couple times. Like the other stuff, I’m just happy I could find it a home instead of throwing it into a garbage pit, like that huge box of used clothes I gave up on finding a charity for.

Speaking of which, the burnable facility was like a huge concrete war bunker. A monster claw would reach into its bowels, and dump it into the incinerator above. I didn’t have my camera on me, but almost felt like I was in the Death Star.

That Friday night, Ike had a BBQ at his place. I braved the rain to attend maybe his last party. The lucky guy has someone moving in after him though, and hasn’t started cleaning yet. We had burgers, guacamole, and other goodies while watching a movie made of nostalgia: “The Sandlot”. While watching, I had very vague memories of watching it before. I remember a quote about leaving nostalgia in the past, and while it’s true, it was still interesting seeing the movie again as an adult.

It’s getting harder to see off friends as well; as it becomes less likely I’ll ever see them again. I stumbled across that while shaking Brian’s hand, though on Tuesday he’s gone to Hokkaido for a couple weeks. Others are leaving on holidays within the next week or two; and I’m gone in 17 days. On a quick side note, Brian taught me why it’s very bad manners to hand off food from one pair of chopsticks to the other; because that’s how the remains of cremated family members are handled. Bones that aren’t ashes are picked and handed around to family members to fill the urn, and he took part in it one time. Ghastly.

What started as a farewell party from Richard's and my own Adult English Conversation Classes, this Wednesday may possibly be my one big farewell party. Needless to say there is lots going on, and even more that needs to be done. After I finished writing this, I filled out lots of paper work, and managed to prepare my farewell speech for the school that I’ll deliver on Friday. Soon I’ll be living out of my suitcase in my own house, and possibly sleeping on the floor…

With so much going through my mind, I tried to escape it all by going to Phil and Theresa’s BBQ in Okaya Saturday night after spending hours cleaning 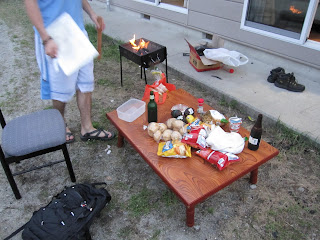 again. It turned out to be a multi-purpose party for various people, and Theresa said it could be mine as well. I had a bit of an embarrassing endeavor; I was cleaning out my freezer at this party too. Throwing out perfectly fine stuff is one thing, throwing out perfectly fine food is another. I brought a box of goodies though and Dougal took most of them off my hands including alcohol.

I had good talks with people, and bid many of them perhaps our final farewell. Instead of getting easier, everything is just getting more confusing; with my mind constantly straying, and conversations sometimes going full circle back to the nightmare that is cleaning my house. Perhaps this is my crutch for dealing with all this emotional turmoil; just keeping myself distracted on things that need to be done. On that note I forgot my camera at Ike’s so I don’t really have (new) pictures for you.

Sunday morning’s garbage run went successfully, and after I went to Honami’s potluck. I made the last of my instant dressing, and some instant gravy, and put it into pots I gave away to her. There was lots of food, and my odd inclusion was well received. We chatted and enjoyed the light rain for hours; a nice lazy Sunday.

I couldn’t sit around for too long though, I had lots to do. After bidding farewell I tried to give away one last thing to them; my monopoly board. I had found it years ago but haven’t played it once in Japan oddly enough. The entire campfire wasn’t interested the night before, and while Honami and her friend haven’t heard of the game, her husband jumped at the chance.

There are very few times in life when you can make someone that happy. I was afraid he would start crying at some points, and I was happy to I could find the game a nice home, as opposed to someone’s closet. I was assured they would play right away, so I’ll ask about it on Wednesday when I see them again. I left with such a great feeling, knowing I just made a good person’s day great.

On the drive home I passed a store I heard had Takoyaki makers. I definitely want to make some when I get home to Canada 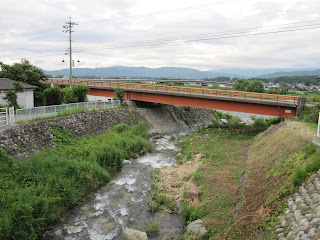 so I went in to pick one up. Before I knew it, I changed my car's oil, and I made a trip to the dollar store too, to get my sister Melissa’s sushi plate, and thus the very awkward switch from “throw everything away” to “buy presents” was briefly made. On the other hand, I don’t really know how much luggage space I have either.

I ended up stopping at 4 or 5 different stores, all of them perhaps for the last time. As for buying presents, maybe I’ve been here so long that it has become much harder for me to pick things that stick out that you can’t find in Canada. I even broke my personal rule and bought some cheap clothes at Uniqlo including a pair of pants that are just a bit too small; they are now my diet goal pants I guess, I’m down around 7kg.

Perhaps I’m just confused. I know life is turmoil now, and I’m somehow getting by each day. Now to make a farewell speech that’s good enough for its purpose, but won’t make me cry too much.