It’s been 3 weeks now with a sore throat. I made my 3rd trip to the doctor now, so maybe that will be the charm. It’s easing up a bit, last week was the worst when I was trying to eat breakfast, but everything was so swollen I could hardly move my jaw. Well, time to think positive.

It’s been a good couple weeks since I’ve been back I think. My deadline for contract renewal was looming. To take on a 4th year, you need to be exceptionally good to get an offer, so I’m flattered that crossed my desk. It wasn’t too cold the day I got back, but the week that followed was one of the toughest times I’ve had yet.

I started going to bed wearing the clothes I’ll wear the next day, so that it won’t be so painful getting up in the morning. Even though I fashioned 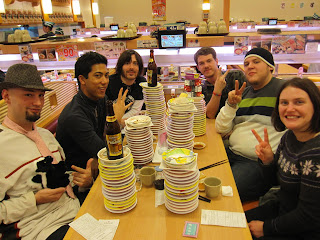 a wind-tunnel for breathing under a pile of blankets, for the first time I was waking up because the blanket in front of my face was all wet; apparently it was cold enough for my breath to condensate that fast. How was I going to live through another week of this, let alone another year? I started to wonder why I signed on for a 3rd year…

The weekend came, and one of Japan’s craziest festivals came up. I didn’t go. I went during my first year and this year I was sick, so I can direct you to the last time I went. Richard went and told me about it; it was one hell of an adventure. Apparently it was snowing so hard, that it took forever for the fire to start, and then later the car was covered in over a foot of snow when they went to leave. Then they drove around for hours completely lost until 4 in the morning when they gave up and went somewhere completely different to get some sleep.

I was glad I stayed home after hearing this. I bought a couple games on Steam for really cheap, as its service continues to be amazing. I got 2 full games for $11, and then it downloaded and was ready to play in less than an hour. So convenient. That was mostly my 1st weekend back; huddled by the heater trying to stay warm while playing games.

I haven’t talked to my tutor Kayo yet, so I haven’t had lessons. The mom I tutor is an accountant, and is busy with the New Year’s taxes maybe, so I have over a month off for that too. My Wednesday class doesn’t start until May maybe. It’s been so long since I’ve had a week off to sit at home and play games like I have. Richard’s computer is having problems, so until it’s fixed he’s been hanging out with me using my laptop while I play games on my other computer.

On Wednesday I was really lucky to have a day off for once to finally join a bunch of people at Ike’s place for some home cooking. The man has talent. I had to skip on the homemade milkshakes though, because the cold aggravated my throat, so maybe next time. It was good to catch up with people.

What stood out for me though, was Jessie giving a talk to Stephen, 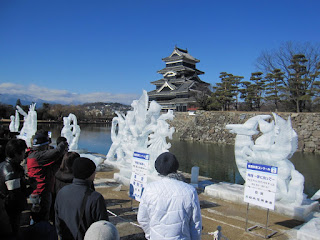 a new Jet, about ways to enjoy his time in Japan. He had such energy, and went on with “you go here and do this, you go here and make friends, you do this” and on and on. I listened closely, thinking “I’ve tried that, I did that, I want to do that but it always fails,” and so on. Suddenly things were really put in perspective.

I remember having that energy, but I’m just tired of hitting my head against a closed door. I’m tired of wanting to play volleyball, but can’t. I’m tired of this damn winter. I’m tired of all the bugs, but the only good thing this winter does is kill them. I’m tired of going to a grocery store, spending an hour looking for something, and then giving up later in defeat.

Of course life is always more complicated than that, but I signed “no” for staying another year.

It was scary at first, but now I feel good about it, and I’m getting excited again for what life may hold after my time here. I’m still too cold and sick (and loving that video game) to really sit down and start piecing a roadmap for my life together yet, but it’s never far from my mind.

Being put into perspective like that helped show me my own warning signs. I still remember that girl that was a pile of negative concerning Japan. It’s good to have role models for the kind of people that you don’t want to be. I learnt something good too from Jessie, how it’s important to pretend you know what they’re saying to you even if you don’t. If you don’t, then people stop talking to you and talk around you. As a teacher I try to weed that out, but never tried it myself.

I don’t believe in living with regrets. When I go over my list of goals for coming to Japan in the first place, either the goals have changed or I’ve seen them through already. I’ve changed a lot since then, it makes sense for my goals to as well. Unless Japan gives me a reason to stay longer, and since you make your own reasons and I doubt it, then I should be home around July/August; so it’s last call for friends or family that want to visit.

So back at the party, Ike urged me to join the sushi-eating contest coming up. I was on the fence, but I wanted to pull through for my team, thinking I could eat my share. On Friday we went up and our block won it all. Normally I eat 12 plates, and that’s a lot of food; but I broke my own record and ate 17. Richard and Michelle pushed me, and I knew I couldn’t let them out-eat me, so we tied at 17.

Ike and Zack had 24 plates each, but Jessie only got to 8 maybe, and tried to make up for it by drinking 7 juice boxes for a higher plate count which ended up not counting. The poor guy tasted only chemicals before long and said he was seeing shapes floating around. The real show-stealer was Chris though. He came in late, and in half the time ate 32 plates of sushi.

The pile was stacked up higher than his head; it was comical if not disgusting. To think my highest record was doubled 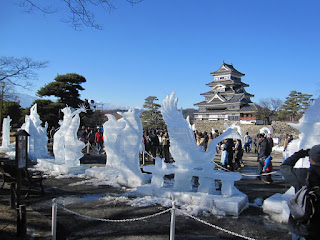 by someone that wasn’t trying and much smaller than me. Hats off to him :) He won the battle and had his sushi paid for, but our group won the war and earned points for some upcoming cup. I guess I’ll write more about it later when I know.

After we went to Patricia’s birthday party. It was a “posh” party, but I didn’t really care so I just put on a tie over my sweater and wore my nice hat. At a convenience store along the way, they were selling stuffed animals and I bought a skunk on impulse. I liked the black and white, and figure he’ll be a nice mascot for my car.

Most people were sleepy after the contest, but ironically the ones that ate sushi were the ones that didn’t get sick. I tried to mingle for a couple hours, but by midnight my throat was so sore that I bided the time until I could get a quiet place to sleep. Alas it wasn’t to be, as I slipped in and out of consciousness in a ‘quiet’ room for a couple hours, with my throat killing me, wondering why oh why do I go to these JET parties after swearing them off around this time 2 years ago for exactly this reason. It was Patty’s birthday though, and I didn’t want to let down our sushi team.

I felt bad too, a number of people came by and tried to talk to me, but my throat was so sore, and my eyes were rolling around in exhaustion. In the morning I was glad I had some sleep, but Nagano City is still a far ways from home. Along the way we stopped in Matsumoto for lunch, and discovered the annual ice sculpture competition at the castle again. We also got to talk with Neal for a while; he had a good holiday.

The girls wanted to go for coffee, and the re-contracting 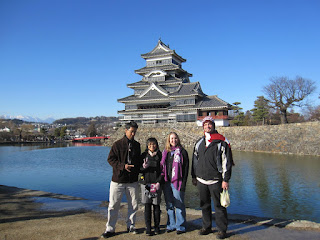 talk came up. I was the only one of the 4 going home, and the girls, both 1st years, half-joked by saying “since you’re leaving, we don’t have to get to know you” or something. I knew it was a joke, but in a way it’s not. I know perfectly well how busy it is here, and after 6 months already I still hardly know them, only having seen them like 4 times. Even Stephen didn’t know I was JET, let alone on my 3rd year.

I’ve always thought of JET as life in fast-forward. The first years are the children, fresh and full of energy, making mistakes everywhere as they have fun figuring life out. 2nd years and so on are like the parents and elders looking out for the children while still learning themselves; being there to help them along with advice and whatever is needed. When a person leaves, all they’ve done and felt and experienced goes with them; leaving just ripples in a pool that fade out over time.

"The big secret in life is that there is no big secret. Whatever your goal, you can get there if you're willing to work" -Oprah Winfrey