My shoji, let me show you it

Nothing too much again this week… calm before the storm to say the least with BIG things coming up this weekend and so on… updates may not be on Mondays for the next couple weeks as I simply won’t be home, but I’ll see what I can do to feed you adventures in a timely fashion.

Monday I met up with John from Saskatoon. We had Italian 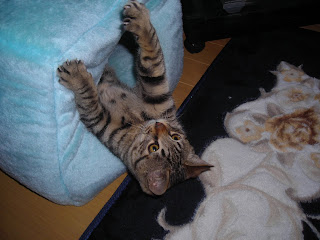 food and just visited, it was a nice night out and nice to see other young people walking around town! On Wednesday Jake suggested we take a trip to a local onsen (public bath/spa). It sounded all right, those places are always nice; I just hadn’t been to a local one yet. That hotel in town had one so we went there. It’s kind of up on the hill with a great over-view of the nearby park and other local treats.

So this onsen was a lot different in that there was no real blinds in the way from enjoying the view, I’ve only seen it once before. So when we got out there ready to jump in the giant hot tub, we both paused in wonder at the beautiful scenery. We couldn’t help but be frozen in time appreciating the mountains coming to life with the upcoming spring, the swans swimming around the now non-frozen lake, the little girl in the parking lot looking up at us butt-naked foreigners…

Haha ya that was a shock. Sure she was 70 meters away or so but we still covered up and jumped in the pool. It was yet another wonderful time out at the onsen, soaking up the amazing scenery and relaxing hot water.

Classes wrapped up and things were largely uneventful… Saturday came around and Kubota came over to help me fix my shoji. If you are wondering what shoji is, I’m sure you all have a picture in your mind of those wood and paper sliding windows that are very Japanese. There is a reason why I don’t have many pictures of my house, but I feel that has changed a lot since moving in, as this place needed a lot of love to help it feel like home. Part of what was falling apart was the paper windows. A combination of it raining and being windy while the windows are open, and me having the humidifier on this winter too long causing all the paper to fall off…

Anyways, so K (short for Kubota, he likes the knickname) and I went to the hardware store to buy replacement materials. I guess recently there is a new style of shoji out, one that doesn’t require a lot of glue or mess. I got this newer style and a slightly higher price of course but I wouldn’t have it any other way. The style I got is a picture of a bamboo stalk going up as opposed to… plain white. And the premium price was $10 for 2 windows instead of $5 for 4 windows.

So first step to fixing the shoji was removing the old glue/paper. We got the remnants wet and scraped it off, then took towels to dry the wood. The next step was to roll the paper out and iron it on. 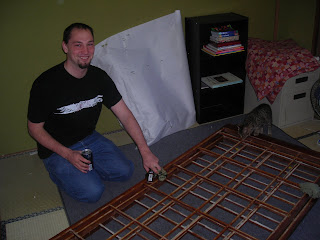 Easy as pie right? Well for the later step we had to kick Otaku out of the room as the paper was quite the toy to her, and she put many holes in it. Luckily the finished product is boring to her and she leaves it alone, and my does it looks beautiful! (no holes) I definitely want shoji when I have my own house someday in Canada. I’m not sure if I’ll do the paper look as drinking causes people to poke smiley faces in it; Patricia has a style where instead of paper it’s glass.

So ya it was an interesting half day of renovations. I showed K how Canadians like to do home renovations; with a beer in their hand. Of course since there were four windows to do there were more than one beer that needed drinking… one thing led to another and K ended up appointed doing the steady-handed tasks. Either way I think I prefer the iron much more than glue even though I’ve never tried it :) Glue is generally unpleasant.

I took K out for supper after as a thank-you gesture and taught him ‘useful’ English all day I’d like to think. Things like “that iron has seen better days” and explaining the method to my madness. We got our food; I got 2 main courses and a dessert while K got one course (my biggest expense in Japan must be food…) Unfortunately K wanted to eat in Ina so the driving involved got me rather sleepy and I had to call it an early night… I was in bed by 8:30. Kinda embarrassing, but that’s what a steady stream of beers since 10 or 11 a.m. can do to you.

So, signs of the economy slowing down: layoffs. K got one and it's been a hard time. Another fellow Canadian got the pink slip from his private job so Neal and I went out with him just to hang out, as it may be the last time. Our first stop however was to gram house, where Neal’s students roped him into attending their high school concert. Now I’m not sure how much many of you remember about high school music, but that bar was smoky enough to choke an elephant and loud enough to put a plane crash to shame... they never even tried to tone down the wafting feedback shaking the room.

English, as always, was something of a novelty in the songs as one song quite easily could have been titled “F@CK YOU!” Neal used his power of Japanese translation to tell us how there were 3 other sentences in the song besides the catchy title followed by the one-finger salute; apparently the singer went through a bad break up.

The audience was fun, several of my students made it out to the party 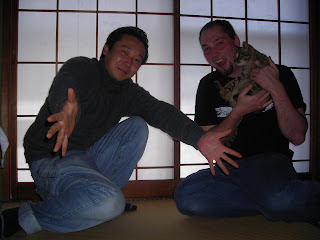 as well. A couple of them were in my advanced English class and tried talking to me…in Japanese. I didn’t know a word they were saying and they didn’t say one English word. I can’t help but feel a bit of failure but let’s blame it on their lack of ganbaru (try hard).

We couldn't get out of there soon enough as our ears were bleeding and my throat was collapsing from the smoke having a techno party in my larynx. We went to a nearby Brazilian restaurant where we had proper hamburgers, then again to another restaurant for dessert and just hanging out. It is always hard to say goodbye to a good person so we cherished the time we could spend together and called it late in the night.

Today I had to rush this update but never had much to write about anyways. I heard from John something bad may have happened to Grandpa back home. My heart goes out to you and I hope everything is alright.