So Christmas visited the Big T & Otaku household last Wednesday (Big T is my knickname here). Inside were presents and foods and letters and love. (awwww ☺) Not to mention a movie! I put it in and gave it a watch; it was Christmas at my mom’s house. It had all kinds of funny moments like Patty breaking stuff while she walked around with the camera, everyone screaming, then the scene quickly changed to something completely different than the panic and disarray expressed moments ago. Or John trying to say “ichi ni san” (1 2 3 in Japanese) with horrible, abominable pronunciation, then quickly having everyone else quickly gang up on him and try to convince him it was Chinese as the movie faded to black.

First thing I noticed was how people changed. It was very small and subtle of course so it was weird to pick that stuff up in the first place and it makes me reflect on how I’ve changed since coming here. I feel like I can handle crowds a lot easier and have learnt many things about many different cultures, not just Japan’s among other things.

Thursday was Valentines Day. In Japan, the men don’t do anything this day, it is up to the women to give chocolate to the boy(s) they like or to co-workers. The men don’t need to give anything back; that is what “white day” one month later on March 14th is for. (pi π day for all my nerd friends. 3.14 ftw!) On this day the men need to give back chocolates to the ladies that they like in return.

I didn’t get chocolate this Valentines ☹

I did get some chocolate from our librarian on Tuesday I suppose, but the other twist to Valentines is you buy for your co-workers. I’m not going to complain though, they’re good chocolates. They were in a fancy box and wrapping too. I think the biggest reason (read: excuse) 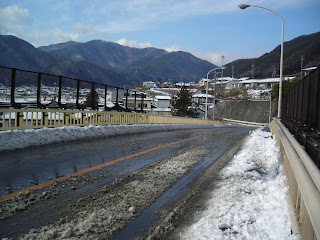 for being loveless this year was because everyone was gone. I only saw two other people the whole day (Kubota and another office worker) as the 3rd years don’t have classes anymore (it’s time to study for university entrance exams) and everyone else was off on a ski trip that I couldn’t attend unless I wanted to use my holidays to go. I was rather disappointed… but someone explained to me how it was probably because my insurance probably doesn’t cover it should something happen while I’m on school time at the slopes.

This repeated itself Friday as well as it was a rather long trip. Thurs-Saturday was a period of great sloth for me. I cancelled a trip to Tokyo for certain reasons, cancelled going to anti-valentines party for other reasons, and again cancelled a day on the slopes for many of the reasons explained in the last post. I suppose that doesn’t make for good story telling. Let’s call it hibernating ☺

Here’s something exciting, so Sunday I woke up and noticed how I was starting to look like a hillbilly, it was warm enough in my house to venture from the warm room, and my fill of sloth finally gave me motivation to get stuff done. I spring cleaned and other tasks for 6-8 hours and need not bore you with the details of my dishes, laundry, haircut, mopping, throwing out old stuff, grocery shopping, and other various cleaning tasks.

It’s funny how my attitude has changed since I resigned the contract. I know I’m here for a much longer haul so I am starting to do things differently. For example I bought a decent vacuum cleaner and finally went through my cupboards to throw out old stuff that has been here far longer than I’d like to think. I found food that expired in 2003, then older stuff in 2002. It was instant miso soup (extremely common in Japan, many have it for breakfast), I gave it a try but it didn’t taste very good so I threw it out ☺ I thought that was bad enough until I found stuff that expired in 2001. This is food that has a very long shelf life of at least a year or two as well so there is no telling how old it is.

Oh and I cleaned my fridge while it was bare and then filled it later. There was split juice and all that other fun stuff, like lettuce frozen in my freezer from when I was still 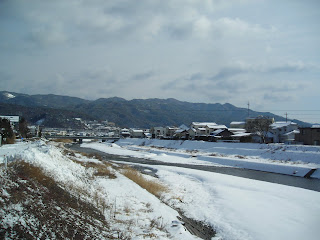 putting stuff in there (laugh it up Patty). If I had to guess, we unplugged my fridge back when I had that video game party because of how much juice the oven was sucking and it hadn’t been plugged in since. Since my entire kitchen is in itself a fridge I didn’t notice the fridge wasn’t plugged in, only thought the light burnt out. All the food was ok but the stuff in the freezer went bad.

When my fridge was empty and I was still being a sloth I made some crazy lazy meals. Like my stir-fry that had onion, cream of mushroom soup, hot sauce, chocolate, vinegar, and other stuff I don’t remember right now. It tasted alright; ah the glorious life of a bachelor ☺ That reminds me of the time my dad taught me how to cook a hot dog over an open stove burner… hey I just thought of how to eat those 2 hotdogs left in my fridge, I could skewer them with a chopstick or something.

So ya that’s pretty much everything. Never really had classes, events got canceled, did nothing on the weekend and never had much human interaction; I played with my kitty a lot though ☺ I could tell you random stories and other tidbits but it’d be so scattered and incoherent. It wouldn’t be a bad thing to for you and I to take it easy on the blog for the week.

I will never get used to being surrounded by beautiful snow capped mountains. It’s breathtaking every time I see them…

"The best time to plant an oak tree is 20 years ago. The second best time is today." -Unknown

The fridge is unplugged...but maybe the light bulb is just burnt out. Glad to see those engineering skills are coming in handy and being put to good use.
Later.

hahaha don't judge me :) But ya it was cold enough in my house that the food didn't go bad.
I havn't built a robot bend on world domination in a while, maybe the 'ol ESE skillz are getting a bit rusty...