How did conferences get such a bad rap?

Had a laid back weekend for once! But you’re here for stories so I’ll tell you about all that went on anyways. Most of the weekdays after work were spent stressed out feeling like I don’t have much free time, there was a mess to clean but the suffocation of feeling like there was too much to do kept anything real from happening.

So Thursday and Friday we had a big conference for JETs to gain more teaching skills and work out problems or whatever they were having. I had never been to a conference before per-say, at least nothing of this size or length. I didn’t know what to expect except for anything you learn from TV and whatnot, and those usually left negative impressions. I can say this one was amazing and I am glad I went.

Met up with lots of friends and new people, exchanged ideas and solutions to problems. One session we were talking about different forms of communication. (telephone, writing, etc) and one group suggested the use of “grunts”. The teacher gave them a “that’s a good answer!” while writing their suggestion off in the corner away from the relevant ideas. This kind of spurred a grunt movement as later group exercises heard many groups grunting to each other like cavemen for their brainstorming sessions. Other shenanigans ensued when asked questions like “how can you communicate romantically?” I’ll let you fill in the blanks on that one.

We were in a school of some sort although it was emptied out for us it seemed. There were classrooms, presentation rooms, a cafeteria and dorms to stay the night. I was kind of surprised how much some people complained about things from the food to the room sizes. For $20 a night (that is reimbursed even) I have no beef with it. Chris and I did a cheap overnight train ride in China once so we know the feeling of being a sardine or having a stranger sleeping 3 feet from you snoring loudly. Also I thought the food was pretty good, supper and breakfast was free.

I wore my pink tie from Korea on Thursday and got a bunch of compliments. It looks cool, what can I say. Although it may be the reason I got called on to answer a couple 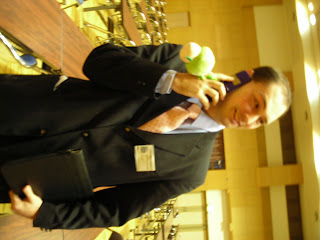 times, having the teacher even say “you with the pink tie! I love it by the way” in the middle of a class discussion. Thursday night had us high school JETs sitting around drinking and having a good time. The doors were locked at 10 though as we had a working day Friday. (Sorry the picture is sideways, I can't figure out how to rotate it.)

Friday was like more of Thursday but with even more useful information. I got paired up with a nice teacher, Shizue sensei, from northern Nagano prefecture and our lesson was picked as the best so we had to present to our small group. We started off with some warm-up activities as if they were the real deal and everyone got a little too into them, insisting to play some more. My favorite one is the “Boggle” warm up. Draw a 4x4 grid on the board and ask students for letters. Then give them 3 minutes to make as many words from that grid as possible, the biggest words being the winner. I like to go and ask the students what their biggest word is. It helps pronunciation, spelling and vocabulary.

After the conference most people just went home. Jake came over later and we relaxed watching some TV shows I had. Saturday was a great day as I had time to finally “catch up” on stuff I left building. Laundry, dishes, cleaning and Christmas packing mainly. I have a box to send home now with various presents but haven’t really wrapped it knowing it would get mangled in transit.

Saturday night Jake and I didn’t really want to go anywhere too far so we decided to walk around Tatsuno and see what there was to be found in terms of mingling with locals. It was a great opportunity to see more of the town I’ve lived in for the last 4 months. I was kind of surprised and disappointed with the lack of young people and the abundance of “snack bars”, 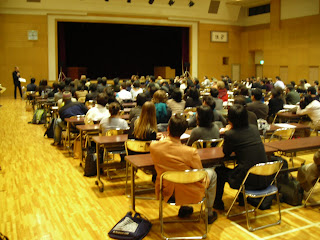 not to mention most places were pretty empty. Snack bars in Japan are places where mainly old men go to spend money to flirt with pretty girls. You have to pay to even sit down and you pay for time to enjoy each other’s company. Pretty shady if you ask me, why not go out somewhere else where you can flirt for free. It was funny too as one snack bar had, in English no less, “we are not associated with Yakuza”. Yakuza is the Japanese mafia for those who don’t know, also the reason why tattoos are so looked down on here as only they wear them.

At the end of the night we were getting tired of all the walking around, maybe the first place was the best in my opinion as the waitress was one of the most gorgeous ladies I’ve seen. Ended up going home but now at least I know I gave the town a chance, might need to go to bigger towns to meet people more my age. Sunday was spent relaxing and playing games again. Jake and I went to a local restaurant that we haven’t tried yet and refilled our kerosene containers for the upcoming cold days. I have a new lid on it now so it shouldn’t slop on my car again.

Today at work was a busy but sad day. It is the last I get to see my 3rd years at Yayoi as they get ready to buckle down and study the rest of their high school career for university entrance exams. I gave them some words of encouragement after the test I gave them; much too long I found out (wish I had time to play one last game or two) and later on had some students visit me in the teacher’s room so they could get their picture with me. I made sure to invite anyone that wanted to visit me at anytime. At least this test after marking it had high marks on it.

It was great as the last part of the test was a writing section and one was “you are at your entrance interview for university, talk about English and Japanese, be creative” or something along those lines. One student wrote down the interview question “do you love Anthony?” and then answered “yes I do!”. I wrote in the comments “alright! I love me too!” haha. Another student wrote down how they would like to talk to more foreigners like “Mr. Tony”. Has a nice ring to it if I must say.

I drove to work today as it was raining pretty hard. Was disappointed to find out it still took an hour to get here largely due to the morning traffic, I should stick with the train then, at least I won’t have to worry about getting in an accident that way, the road and drivers some days leaves you wondering, just like back home I suppose. It is just less stressful not driving but at least I was kept mostly dry and have the flexibility to go home whenever instead of waiting an hour for the next train. It’s nice to have options I guess.

Well sorry there wasn’t much to write about this week, I needed the R&R. It is kind of nice having the blog, as it is a good kick for me to get out the door some days and make new adventures to report, like how I finally got out and walked around this Saturday. I also look at interesting situations differently now, as if I was narrating my own life for future stories here. I have the option of taking a bunch of holidays for upcoming Christmas/ new years but have yet to make solid plans, I should really get on that… maybe Thailand? Korea again? Also figure out how I’m getting to Tokyo next weekend for the Daft Punk concert, should be a blast ☺

"Life begins at the end of your comfort zone." - Neale Donald Walsch